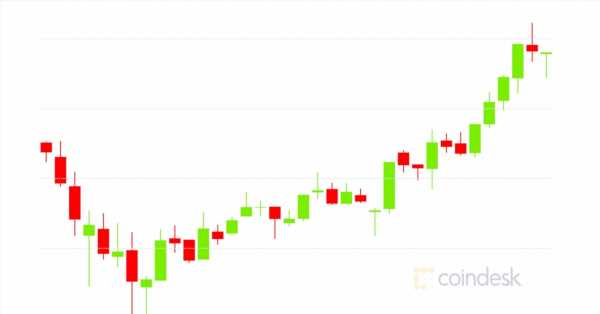 Higher-than-average spot volume, even for the past month, is helping push bitcoin’s price upward at a time when traders are plowing into ether futures at a quick pace to open 2021.

Read More: Bitcoin Bounces Back Above $31K After Monday’s Drop

“Bitcoin has extended its already-steep uptrend to new all-time highs,” said Katie Stockton, a technical analyst for Fairlead Strategies. “The signs of exhaustion that appeared in December were absorbed via a brief consolidation phase, and there are no active overbought ‘sell’ signals.”

Stockton still sees “support,” the price floor where traders step to buy, much lower than the current spot price.

“Initial support is below $25,000, which hints at a continued day-to-day volatility,” she said. Since Dec. 31, bitcoin’s realized volatility has been creeping back up, from 55.5% to 63.3% Monday, a rise not entirely uncommon of late but nonetheless something traders track.

“On a technical basis, things have been overbought for a while,” said Andrew Tu, an executive for quant trading firm Efficient Frontier. “The overall trend is still upwards and this seems unlikely to change, though the pace may not be like it was during the holiday season.”

Spot bitcoin volumes are looking quite robust; Monday was the highest-volume day on the eight CoinDesk 20 exchanges in the past month, at over $6.6 billion. Tuesday’s spot volume is also looking healthy, at $4.2 billion as of press time. In the past month, volumes have averaged $2.3 billion per day.

“If bitcoin continues to rally at its current rate, I believe we could see a price of $54K around Valentine’s Day,” said Nicholas Pelecanos, head of trading for blockchain ecosystem provider NEM. “We could see a higher price than this by the end of Q1; $74K is also on my radar.”

However, Pelecanos still envisions an eventual retreat from those lofty forecasted prices. “I have the sense a pull back from $54K would leave the bitcoin price to consolidate around $35K,” Pelecanos said.

It may be hard to remember but less than a year ago during 2020’s sell-off in traditional and crypto markets, bitcoin hit a low of $3,867, according to CoinDesk 20 data.

“Based on previous cycles we could be in for a year or so of extreme bullishness,” Pelecanos said. “With all cycles, the crash comes from the madness of the crowd. There won’t be a catalyst news story, the market will just run out of buyers.”

The ether futures market continues to see staggering gains in the first trading week of 2021. Since Sunday, ether futures open interest (OI) on major venues has grown $350 million to $2.95 billion total, with Binance by far leading the way at $734 million in open interest alone.

The record-high open interest could easily simmer down, according to Vishal Shah, founder of derivatives venue, Alpha5. “It’s just leverage. It wipes itself out a lot when financing gets high and the market is looking for a story once it races ahead,” he told CoinDesk.

Brian Mosoff, chief executive of investment firm Ether Capital, said ether’s spot price still has room to grow, and the growth of futures is a sign of that.

“ETH is still below the all-time high, and many believe with all the positive news in the latter half of 2020 it still has room to grow,” Mosoff said. “Ether futures are at an all-time high as the market sentiment has drastically shifted in the last few months. I’d attribute it to the successful launch of ETH2, macro conditions looking to alternative asset classes to hedge pending inflation and a robust ecosystem.”