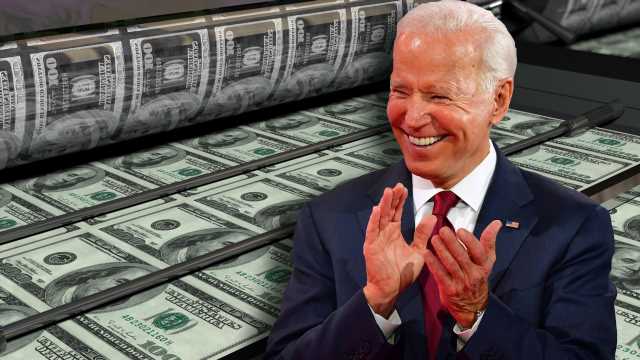 Reports show a vast majority of the American populace has been worried about rising inflation and as the weeks roll by, the financial situation continues to look grim.

US Senator: ‘There’s No Justification for the Fed to Maintain Its Purchases’

A few analysts believe the upcoming two-day meeting held by the U.S. central bank’s Federal Open Market Committee (FOMC) will give markets clues on whether or not the Federal Reserve plans to taper quantitative easing and raise interest rates. Meanwhile, Joe Biden’s administration has dismissed inflation and Biden claimed at a recent CNN Town Hall that he doesn’t know anybody “who’s worried about inflation.”

On Monday, Reuters reported that the U.S. central bank is divided over the rising inflation and now the country’s monetary managers are dealing with double inflation due to supply chain complications. To further the problems the U.S. 10-year Treasury note yields slipped lower on Monday morning as investors are concerned about this week’s FOMC meeting.

The chief economist at PGIM Fixed Income, Nathan Sheets, told the press that people are asking these questions because the U.S. economy has been doing better. “The economy is, bottom line, much better than it was a year ago,” Sheets said. “It is getting harder and harder for the Fed to explain why it needs to keep buying $120 billion of assets a month.” U.S. senator Pat Toomey told the publication Politico in an interview that the spending is not justifiable. Toomey said:

There’s no justification for the Fed to maintain [its purchases] at current levels, and doing so seriously risks contributing to heightened inflation.

Politico also discussed the situation with Lou Crandall, the chief economist at Wrightson ICAP and he called the Fed’s spending disadvantageous.

“It’s counterproductive on every level,” Crandall remarked. “Encouraging more borrowing like this is just not necessary,” the ICAP economist added. PGIM’s chief economist Sheets stressed that bond market signals show less concern about future inflation. “There is no reason whatsoever for us to be in a hurry here,” Sheets said.

“Everyone’s questioning what we’re getting for $120 billion right now,” Greene explained. “But tapering could have even more nefarious effects, so the risk of carrying on seems lower than the risk of backing out of it too abruptly.”

Desmond Lachman, a South African-born economist and finance author, recently explained that it’s “time for the Fed to take away the punch bowl.” Lachman said the U.S. central bank should have learned from past bubbles in his latest opinion editorial for The Hill. Our painful experience with the bursting of the 2000 dot.com bubble and the 2006 housing and credit market bubbles should be informing the Fed of how costly burst bubbles can be,” Lachman emphasized. The economist added:

When these bubbles burst, they can have major spillover effects on the financial system. They also can have costly effects on output and employment, which make it difficult for the Fed to meet its dual mandate of price stability and full employment.

At the CNN Town Hall, U.S. president Joe Biden shrugged off fears of inflation and even mentioned the economist Larry Summers, who recently warned about runaway inflation at the end of May. “I don’t know anybody, including Larry Summers, who’s a friend of mine, who’s worried about inflation,” Biden said.