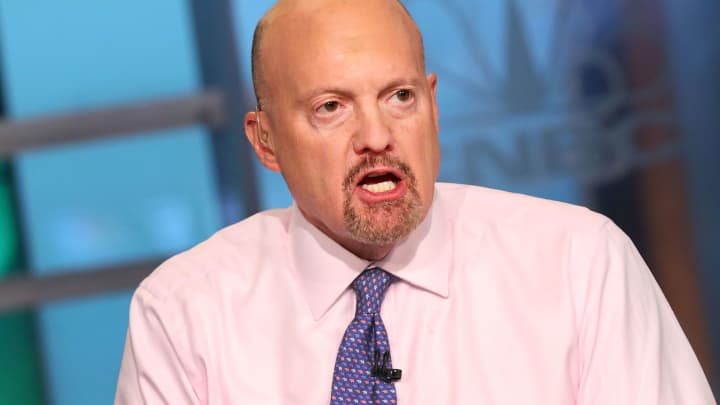 Cramer says he owns bitcoin, sees it as alternative to large cash positions, which make nothing

CNBC's Jim Cramer said Tuesday he owns some bitcoin and sees it as one of several investment choices in lieu of parking large amounts of money in cash, which in the current low interest rate environment earns basically zero.

"I own bitcoin. I've owned it for some time," Cramer said on "Squawk Box." "It's an alternative to a cash position, where you make absolutely nothing."

"As a way to have a pastiche of things that you should use your cash with, I'm all for it. I think it's almost irresponsible not to include" bitcoin, Cramer added, saying he also views bitcoin, like gold, as a store of value and protection against inflation.

The "Mad Money" host talked about his personal views on bitcoin while reacting to Tesla's revelation Monday that the electric auto maker invested $1.5 billion in bitcoin and plans to accept it as a payment method.

Bitcoin early Tuesday soared to an all-time high over $48,000 before pairing some of those gains as buying continued one day after Elon Musk's Tesla announced its investment, the latest evidence of institutional interest in the world's biggest cryptocurrency.

Last year, Cramer tweeted on Dec. 11 that he was thinking about buying some bitcoin.

Shortly after, in an interview with his financial site TheStreet, Cramer said he decided to buy some when it went back under $18,000. He did not mention how much bitcoin he purchased.

"Bitcoin is exciting," Cramer told Tuesday. But he advised investors that it would be a good idea to hedge positions in the digital coin because it's so volatile and there are not a lot of sellers right now.

Cramer called bitcoin a "little inflated" but pointed out that "there's plenty of people who say it could go to $100,000."

One of those crypto investors who believe that bitcoin could rise to those levels by the end of the year is Galaxy Digital founder Michael Novogratz, a former Fortress hedge fund manager.