On Wednesday, bitcoin dropped 10% to around $8,250, weighed by another wave of bad news, after Alphabet Inc.’s GOOG, +0.01%GOOGL, +0.15% Google announced it was banning advertising related to cryptocurrencies, and Rep. Brad Sherman, D-Calif., described virtual currencies as “a crock” at a hearing on Capitol Hill.

Bitcoin has been slumping in March after rallying for much of February. It is down 43% so far in 2018. 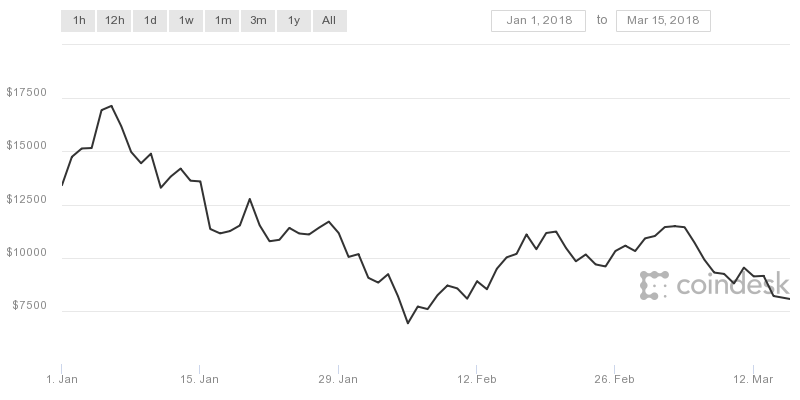 “This represents a retracement of the recovery that occurred after the early February lows,” said William O’Loughlin, a Rivkin Securities analyst, in a note. “It is looking increasingly like the rapid gains of 2017 won’t be repeated in 2018.”

Read more: John Oliver on cryptos: ‘This market is essentially the Wild West’

Some heavy hitters in the tech world have pumped $2.5 million into San Francisco-based startup Lightning Labs. The company is working on a project that would speed up blockchain transaction times while simultaneously reducing costs, an issue that has dogged the industry.

One of the investors is Jack Dorsey, chief executive of Square Inc. SQ, +0.42%  and Twitter Inc. TWTR, -2.19% . Dorsey has been dipping his toes into the digital-asset world of late. In November, Square announced it would let its users buy and sell bitcoin on its Square Cash app.

Speaking with Maria Bartiromo at the Economic Club of New York, Peter Thiel said Thursday he was betting on cryptocurrencies as a hedge against the world falling apart. Thiel is no stranger to digital currencies. According to a Wall Street Journal report in January, his venture-capital firm Founders Fund has bought around $15 million worth of bitcoin.

“I would be long bitcoin and neutral to skeptical of just about everything else at this point,” Thiel said, according to Recode.