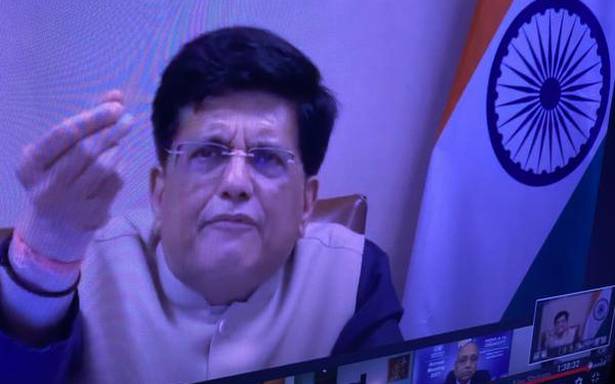 An unprovoked 19-minute tirade from Commerce and Industry Minister Piyush Goyal on August 12, asserting that Indian industry’s business practices went against national interests, has left India Inc CEOs baffled, with Mr. Goyal repeatedly singling out the 153-year old Tata group in comments that he said came straight from his ‘heart’.

After the Minister’s remarks at the Confederation of India Industry (CII) annual meet stirred up a hornet’s nest in higher echelons of the government, CII was asked to pull down the video from their Youtube channel. An edited version was uploaded on Thursday night but this had also been blocked by Friday evening.

Calling out Tata Sons’ president for infrastructure, defence and aerospace, Banmali Agrawala, Mr. Goyal expressed deep anguish that Tata Sons had opposed rules to help consumers framed by his ministry. “Me, Myself, My company — We all need to go beyond this approach,” said Mr. Goyal, who also holds charge of the Ministries of Textiles and Consumer Affairs, Food and Public Distribution.

The Tata group did not comment on queries about the Minister’s comments. Queries to CII had also not elicited a response at the time of going to press. The Hindu has a recording of Mr. Goyal’s remarks.

While government officials conveying their priorities to business leaders isn’t unusual, the August 12 episode is perhaps unprecedented as specific attendees were questioned about their business practices with insinuations they were not acting in the national interest.

Industry leaders were particularly flummoxed as Mr. Goyal’s remarks, indicating a troubling lack of faith, came just a day after Prime Minister Narendra Modi assured industry of complete support and urged them to take more risks and invest in the country.

Questioning domestic businesses’ priorities and commitment towards India, Mr. Goyal even challenged Tata Steel to demonstrate if they can sell their products in Japan and Korea, arguing that companies in those countries are ‘nationalistic’ and won’t buy imported steel. Indian industry, by contrast, would import even if it helped them save just 10 paise in the finished cost of goods, and then lobby to avoid the levy of anti-dumping duties on such imports, he asserted.

These impromptu jibes came in response to innocuous ideas from a few CII members, including Mr. Agrawala who had simply broached the need for a greater emphasis on skilling the youth, and DCM Shriram chairman Ajay Shriram’s request to help smaller firms that have been hit harder by the COVID-19 pandemic.

The Minister’s remarks on Tata Sons were presaged by the insinuation that Indian firms structure FDI transactions in a manner that violates the spirit of the rules.

“I tell you all to rise above fanciful schemes…. the ways you are shown to structure transactions, add this caveat and put this structure. This is how the law can be broken, do this partnership that will be compliant of FDI rules… Lord knows where the spirit of the rules is, but somehow you squeeze it into the ambit of the rules,” the Minister said.

“At least you should resist the greed of these foreigners. You are welcome to do good, honest business. But in wrongdoings… when I read names that have entered partnerships with Falana Dhimkana (anyone and everyone),” he trailed off.

Earlier, the Minister noted that “too much profit in a few hands can lead to a lot of problems for a country“ and urged industrialists to not “let the greed of some deprive the need of many”.

At one point, he expressed disappointment that Indian industry wasn’t giving early-stage funding for start-ups despite him having “talked to Uday (Kotak), Pawan (Goenka), Tatas, Ambanis, Bajajs, and the Birlas” to pitch in. “Even if a few don’t make money, you can sacrifice this much for the country,” he noted.

Hinting that development is also industry’s responsibility, he referred to undeveloped tribal areas near the commercial capital Mumbai, stating: “There’s a limit to how much the country can tolerate such inequality. There was total resistance when we were trying to get land in Palghar for high-speed rail corridor. Why? They asked: What have you done for us? You are taking our land and getting roads, infrastructure, railways — but there’s no improvement in our life. This could be a cause of worry if people run out patience sometime.”

“Synergy can’t just be our policy should come early and we should get incentives. It is a joint and severed responsibility, not the responsibility of government alone,” Mr. Goyal emphasised.