The total amount of Ether (ETH) held by all the crypto exchanges fell to its lowest levels, just as its prices rose back above $3,000 per token on Sept. 23.

Data collected by CryptoQuant, a blockchain analytics platform, showed that exchanges’ net Ethereum token reserves dropped to 18.533 million ETH, compared to 23.92 million ETH a year ago. Meanwhile, the cost to purchase one Ether rose from almost $349 to as high as $3,078, showcasing an inverse correlation between ETH reserves on exchanges and prices.

Lower exchange reserves point to traders’ likelihood of holding the underlying cryptocurrency than trading it for other digital/fiat assets. Hence, if the demand for the token tends to rise, the lack of adequate supply helps to boost prices.

So it appears, Ethereum’s native token has started fitting the classic low supply-high demand bullish model. For instance, Dapp Radar reported that the total value locked (TVL) across the decentralized applications industry reached $142 billion, out of which 68% was concentrated on the Ethereum network as of August 2021.

On the other hand, more and more Ether tokens started going out of active supply after Ethereum announced its staking feature in Nov 2020, as the network geared up to become a full-fledged proof-of-stake blockchain by 2022.

The network started burning one of these splits–the base fee users pay to miners to process transactions. As a result, more ETH tokens went out of supply. Data tracking portal WatchTheBurn.com noted that the EIP-1559 feature has contributed in the burning of 352,262 ETH to date, which is about $1.1 billion per the current exchange rates.

Lark Davis, an independent cryptocurrency market analyst, stated that the ongoing supply-demand dynamics in the Ethereum market would help shoot ETH prices towards $10,000.

Cryptocurrency markets this week performed in response to a looming housing crisis in Chinese property sector and its ripple effect across global economies.

In detail, the ETH/USD exchange rate dropped 20.78% in the first two days of this week, going to as low as $2,651, as investors limited exposure in riskier markets and scrapped for safest havens like the U.S. dollar and Treasury bonds. Fears of contagion from the debt crisis at China Evergrande Group, which owes billions of dollars of bonds to global investors, sparked the sell-off.

Blockchain data tracking service Santiment noted that the Ethereum token might keep bouncing as long as its short-term holders remain unprofitable. The portal cited the market value to realized value (MVRV) ratio–calculated on a seven-day average–behind its bullish analogy. 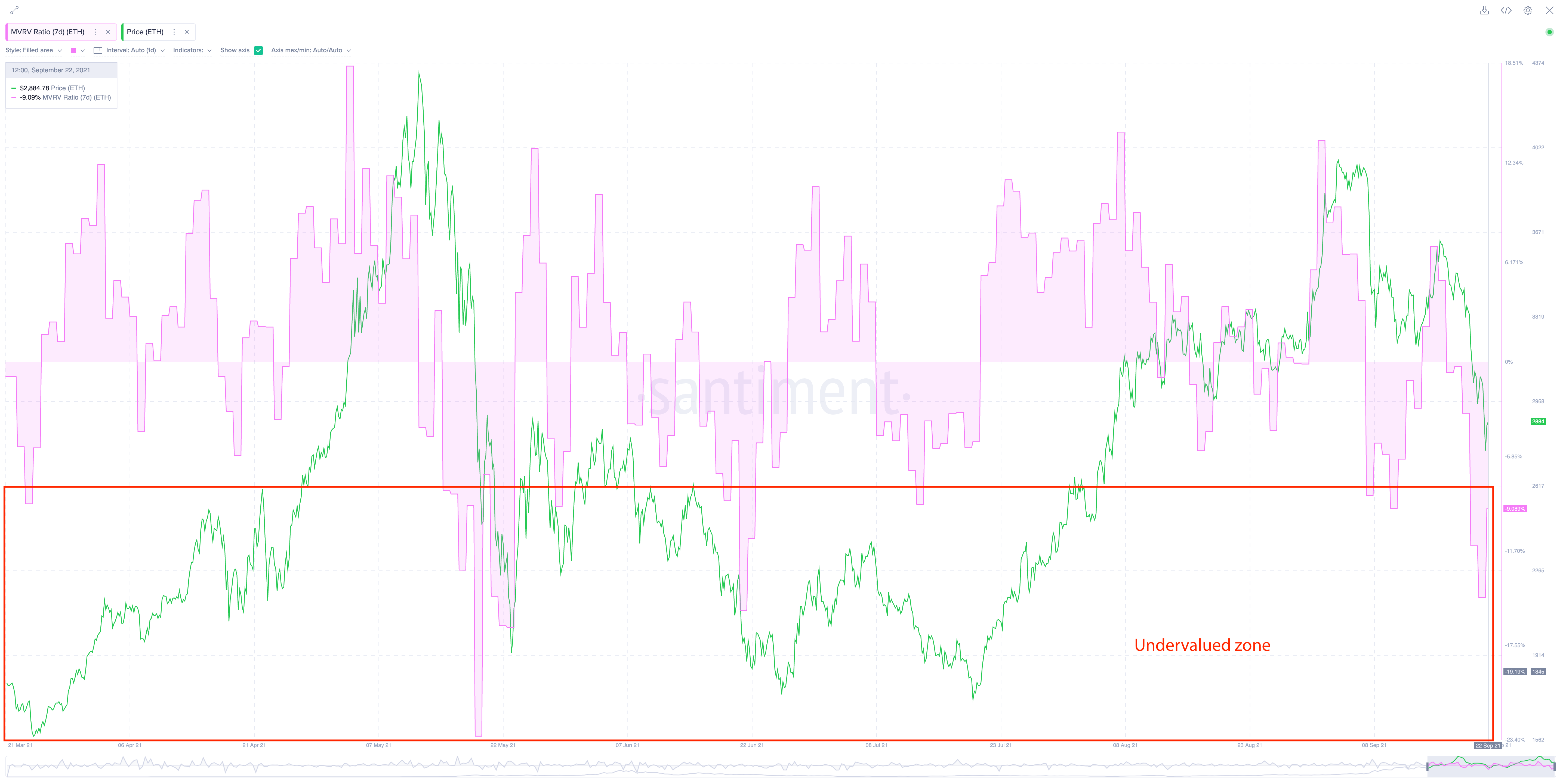 “Short-term wise, MVRV 7D is suggesting a bounce, but the real rally is unlikely until we get closer to the next major speculative event – The transition to Proof-of-Stake (PoS) in 2022.”