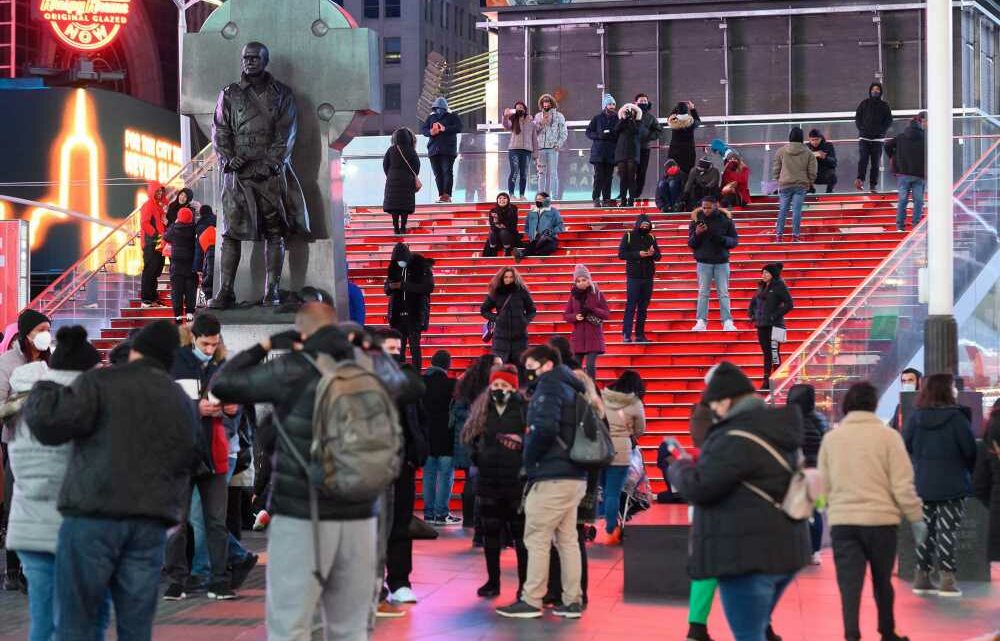 Woman dies after being struck by dump truck in Times Square

Busted a move: Man hit with gun rap while dancing in Times Square

Times Square, once one of the largest tourist attractions in the world, is slowly waking up from its coronavirus-induced slumber, The Post has learned.

Some 105,000 daily visitors on average have been walking through the Big Apple’s largest tourist attraction to experience its massive billboards and neon lights, trudge into nearby office buildings — and more recently to dine indoors at the restaurants that allow it.

That represents a 65 percent decline from the area’s bustling pre-COVID-19 days, but it’s a vast improvement over the ghost town the popular pedestrian walkway became at the beginning of the pandemic when just 35,000 people a day were tallied by electronic counters embedded in the the district’s streetscape.

The Times Square Alliance, which promotes the district, says it’s encouraged by the progress. And local businesses agree.

“We saw the bottom in March and April, plateaued in September at 105,000 and we’ve maintained that,” Tom Harris, acting president and chief operating officer of the Alliance told The Post. “I think it’s a strong number compared to other areas of the city.”

The Alliance has no way of knowing who the passersby are, whether they work in the district, are residents of nearby Hell’s Kitchen or are visiting from outside the city.

But whoever they are, they appear to be taking advantage of the area’s local shops and other amenities, including restaurants that opened at limited capacity for Valentine’s weekend.

“I’m seeing a start of a comeback,” Greg Wetanson, co-owner of Dallas BBQ and Tony’s Di Napoli in Times Square told The Post. His massive restaurants reopened for indoor dining over the Valentine’s Day weekend and served three times the number of diners he had expected.

The two eateries drew 18- to 28-year-olds in groups of eight to 12, families with young children, loyal customers from Staten Island, Brooklyn and Queens and tri-state area suburbanites who reserved tables over the weekend, the restaurateur said.

“A lot of kids have been stuck home with their parents,” Wetanson noted, adding that his restaurants kept in touch with his repeat customers over the past year, making deliveries to the suburbs for special occasions like the Super Bowl and regular deliveries over the summer to the Hamptons.

Jeremy Merrin, founder and CEO of nearby Cuban eatery Havana Central agreed that there’s reason to be optimistic, thanks in part to rules that let city eateries start serving customers indoors again at 25 percent capacity starting on Feb. 12.

“We were full on Valentine’s Day and I think most of our customers were tourists,” Merrin said.

Business at Havana Central was down 82 percent in 2020, but Merrin is hoping the resumption of indoor dining — including a potential bump to 35 percent capacity starting Feb. 26 — will lead to more sales.

“We’ll see what the next week or two looks like, but I do think there is demand,” he said. “There are New Yorkers who have been waiting for things to reopen.”

The bulk of restaurants that remain closed have made it clear they are waiting for Broadway to turn the lights back on before they do.

Gov. Cuomo earlier this month said he is looking into reopening Broadway for small audiences and with the use of extensive COVID-19 testing, but he has yet to offer a time frame for when that might happen.

“We are closed for the duration of the closures of the theaters,” reads the sign at high-end Venetian restaurant Osteria Al Doge at 142 W. 44 St. Pergola Des Artistes at 252 W. 46th St. also has a sign stating it “will be closed until Broadway reopens.”

Currently, only about half of the district’s 309 eateries are open and the bulk of them are quick-service or have pivoted to delivery, Times Square Alliance’s Harris said.

It’s not just restaurants that are suffering. Office buildings are about 10 percent occupied, while area hotels are reaching about 20 percent occupancy, Harris said.

And while New Yorkers love to hate on the over-crowded chaos of Times Square — the second most Instagrammed place on the planet behind Disneyland in 2017 — it’s vital to the health of the rest of the city.

Despite spanning just a few city blocks — from West 42nd to West 47th streets between Broadway and Seventh Avenue — it made up for one in every seven jobs across the entire city in 2016, according to Times Square Alliance data.

It takes up just 0.1 percent of the city’s land area, but was responsible for 15 percent of the economic output that year as well, the Alliance data shows.

Since the pandemic started, however, more businesses there have closed than have opened. The only restaurants that have moved into the district since the pandemic started have been fast-food joints, including a Chick-fil-A at 675 Eighth Ave. and burger joint Mooyah at 485 Seventh Ave., which opened during the big snow storm on Feb. 1.

A store employee for a large retail chain in Times Square that sells watches and accessories said customer traffic is down 90 percent. Lack of tourism is a big factor, said the employee, who did not want to be identified because she is not authorized to speak to the media.

While there have been some tourists from Puerto Rico and South America because flights from those areas are so inexpensive, the bulk of Times Square’s visitors are “people who can drive to the city,” she said.

Zane Tankel, CEO of Apple-Metro, is among the business owners who have given up on returning to Times Square until it returns to its former bustling self with 380,000 visitors passing through each day.

Apple-Metro, which owns 34 Applebee’s Neighborhood Grill & Bars in the NY metro area, closed its two Times Square locations in March and has not reopened them due to a lack of foot traffic in the area, he told The Post. His Applebee’s on 42nd Street — which had served some 20,000 diners a week — is located next to some 40 movie theaters that have been closed, while his eatery on West 50th Street and Seventh Avenue depended more heavily on the theater district.

Asked when he will unlock his Times Square restaurants again, Tankel quipped: “When you look up at the sky and start to see airplanes flying over the city, I’ll reopen.”