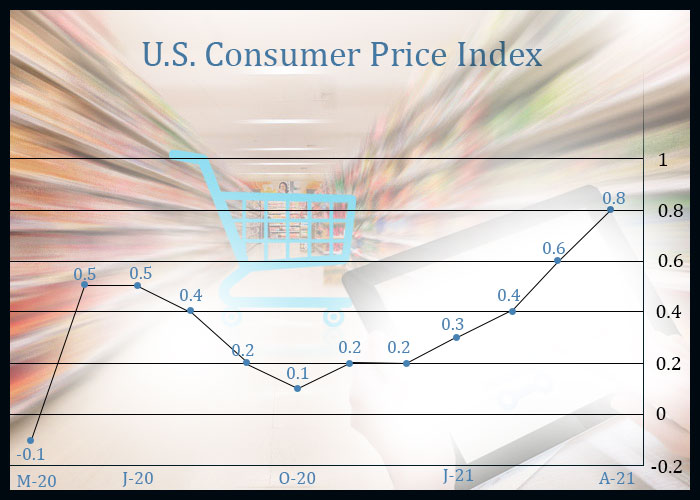 Partly reflecting a spike in prices for used cars and trucks, the Labor Department released a report on Wednesday showing U.S. consumer prices increased by much more than expected in the month of April.

With the much bigger than expected monthly increase, consumer prices in April were up by 4.2 percent compared to the same month a year ago, reflecting the biggest jump since September of 2008.

The stronger than expected consumer price growth in April was partly due to the spike in prices for used cars and trucks, which soared by a record 10.0 percent and accounted for more than a third of the increase by the consumer price index.

Prices for food also rose by 0.4 percent during the month, while energy prices edged down by 0.1 percent after skyrocketing in recent months.

Excluding food and energy prices, core consumer prices advanced by 0.9 percent in April following a 0.3 percent uptick in March. Core prices were expected to rise by another 0.3 percent.

The much bigger than expected jump in core consumer prices reflected the largest increase since April of 1982.

Along with the spike in prices for used cars and trucks, higher prices for shelter, airline fares, recreation, motor vehicle insurance, and household furnishings and operations also contributed to the increase in core prices.

Core consumer prices surged up by 3.0 percent year-over-year, marking the biggest annual increase since January of 1996.

Michael Pearce, Senior U.S. Economist at Capital Economics, described the numbers as “scary” but said muted gains in the cyclical components of the consumer price index lend weight to the Federal Reserve’s argument that the surge in inflation in April will be “largely transitory.”

“With employment still more than 8 million short of its pre-pandemic level, we expect the Fed to maintain its dovish line, even if, as we expect, inflation gains broaden out over the coming months,” Pearce said.

On Thursday, the Labor Department is scheduled to release a separate report on producer price inflation in the month of April.