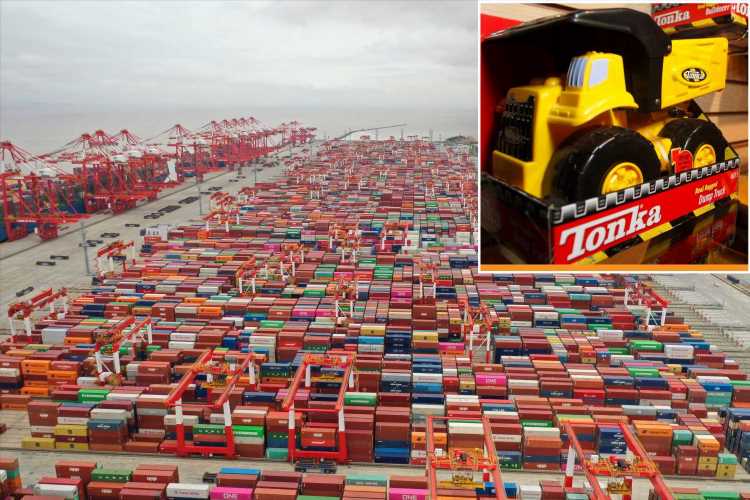 Bubble tea shortage hits US, could last for several months

A toy shortage is threatening the US holiday sales season — and retailers can thank a stubborn lack of shipping containers needed to bring them home from China.

Some 50,000 Tonka truck toys are stranded in Shenzhen, China, just north of Hong Kong, where they have been boxed up and ready to be delivered to US retailers for weeks, The Post has learned.

Only there are no shipping containers available to transport them, which has resulted in boxes of trucks being piled up so high they practically touch the tops of the doors and elevators at the otherwise empty office space where they are being stored, according to photos obtained by The Post.

The towering boxes span from wall to wall, covering every inch of the floor space available except for the small walkways carved out for people to pass, the photos show. Other photos show dozens of boxes — each bigger than an oven — blocking an empty receptionist desk and filling up narrow hallways.

Jay Foreman, chief executive of Basic Fun, told The Post that the dramatic pics were provided to him by the manufacturer of his Tonka trucks, which has been forced to store the goods at a newly constructed office building it has yet to occupy.

The factory, which he declined to name, has been so desperate to move the boxes and recover its office space that it’s warned Foreman the trucks could soon end up in the factory’s parking lot covered with tarps. The factory itself — and its warehouse — are already filled to the gills with toys from other companies, including Mattel and Hasbro, Foreman said.

The manufacturer has also threatened to stop taking any new orders until the problem is resolved, he said.

“We are getting a lot of pressure from them now,” Foreman told The Post. “They can’t physically make anything else until I source containers.”

It’s not just Tonka Trucks that are stuck in no man’s land. A global transportation bottleneck created by the pandemic — and worsened by the week-long blockage of the Suez Canal in March — is resulting in shipping delays across the globe for makers of electronics, apparel, appliances and even food.

It’s contributing to sky-rocketing prices for US consumers — and unless its resolved quickly, it could result in some big bills this holiday season.

Industry sources say they fear the bottlenecks at ports will only worsen as China battles a fresh wave of coronavirus outbreaks. Factories that aren’t waylaid by the virus may still need to idle their workers and machines simply because they have no place to store the all the merchandise gathering dust as it waits to be shipped.

“At this point, we don’t know how the holidays will be, but we are concerned,” said toy consultant, Richard Gottlieb. “This is a bad time for shipping to be so unpredictable.”

It’s not just that shipping containers are scare. They are also costly.

The price of shipping a 40-foot container to Los Angeles from Shenzhen in Southern China — where most of the world’s toys are made — is up 63 percent to $6,341 from the beginning of the year as activity at the Chinese port has fallen to 30 percent of normal levels, according to a recent Wall Street Journal report.

The scarcity has resulted in bidding wars so fierce that “containers have been unloaded and refilled with someone else’s stuff who was willing to pay more,” Gottlieb explained.

Hasbro in April flagged rising transportation costs as a factor in its decision to raise toy prices this year. And Mattel has said that added freight charges have had a “significant impact” on its margins.

In addition to making some products costlier and harder to find, the shipping container shortage could also result in some goods disappearing from store shelves entirely.

“I predict there will be a scarcity of low-priced products,” Gottlieb said. “The relative cost to the container may make it unprofitable — not just for toys but for any consumer products. Lower ticket items will suffer.”

Foreman says he recently scored 12 containers that will hold about 12,000 of his 50,000 stranded Tonka trucks. They are scheduled to ship out this week — but at a steep cost.

“We feel like we are victims of price gauging and prisoners of these freight lines,” Foreman said.

‘India is at the cusp of a growth cycle’