If you want to start a business, the South might just be the place to go, according to a recent report.

Area Development Magazine ranked Georgia as number one on its list of “Top States for Doing Business.” The Peach State was followed by Tennessee, South Carolina, Alabama and North Carolina, to make up the top five.

However, not all the states on the outlet's full list of the 20 best states were in the South. Lower on the list included New York (18), Michigan (19) and Indiana (tied with Virginia at 10).

The magazine surveyed business consultants to find the results, asking the experts to name which states were the best places to do business based on 12 categories. 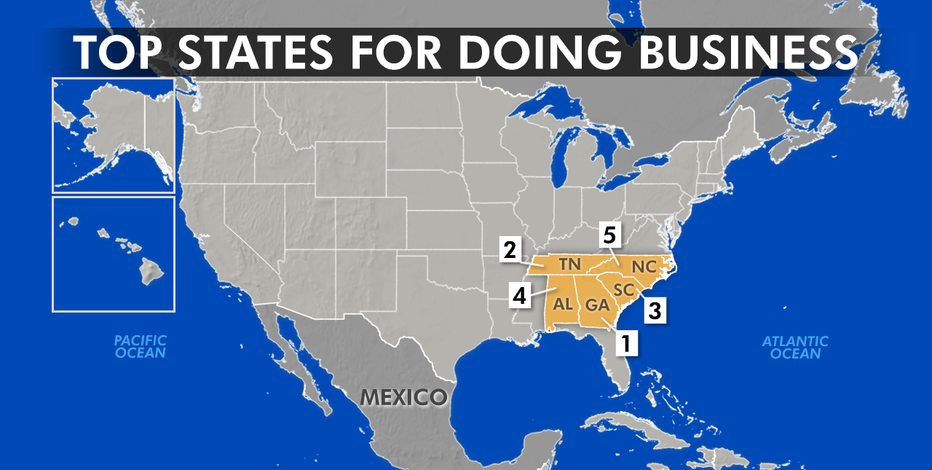 The top five states for doing business, according to Area Development Magazine are Georgia, Tennessee, South Carolina, Alabama and North Carolina, in order.

Georgia was the top state for the sixth year in a row, according to the magazine, with the following five states also making repeat appearances on the shortlist.

There are concerns that a recession is near, Juanita Duggan, the president of the National Federation of Independent Business (NFIB), told FOX Business’ Charles Payne on Tuesday that business conditions are actually quite good.

“There was an increase in profits, there was an increase in sales and there was increased job creation, but in spite of that, the optimism index dropped 1.6 points and, importantly, the uncertainty index rose by 4 points,” Duggan said. “So, you see something that is not in lock-step. Current operations are great, small business economy is still on fire, but the confidence is starting to crack.”

“You can certainly create a false reality, but just because you hear something a lot doesn’t make it true,” Duggan added. “The small business economy is still on fire, even though the optimism index fell by 1.6, it’s still in very, very high territory historically.”

To see which states are the best for doing business, here’s Area Development’s list of “Top States for Doing Business.”

OpenUBI Ecosystem Launched by GoodDollar and Partners in Berlin