Los Angeles County's Board of Supervisors, Department of Public Health and Department of Health Services have renewed contracts with two public relations firms for the second time after spending millions in taxpayer funding since March to have them craft and guide a Coronavirus Response Media campaign, despite the county having its own fully-staffed communications team.

According to documents obtained by FOX 11's Bill Melugin, Fraser Communications and Mercury Public Affairs were originally awarded separate, no-bid contracts of $200,000 on March 12 and 30 respectively.

Fraser was hired to draft press releases and talking points, monitor public perception of COVID-19 and the county's reponse to it, and develop and implement an advertising campaign via local outlets and social media on key messages and best practices, among other duties.

As for Mercury, the firm was tasked with creating a “Multicultural and Ethnic Outreach and Communications” plan in order to reach diverse audiences in LA County, part of which includes “recruiting and deploying non-County messengers, celebrity influencers, and other surrogates" to help with messaging on social media.

Mercury also supported staff at the Los Angeles County Department of Health Services with media inquiries and briefings and assisted with messaging around the recovery and reopening of Los Angeles County facilities and the broader business community, including small businesses and their employees, among other duties.

The contracts show that LA County had applied for the cost to be reimbursed via federal or state disaster aid money. 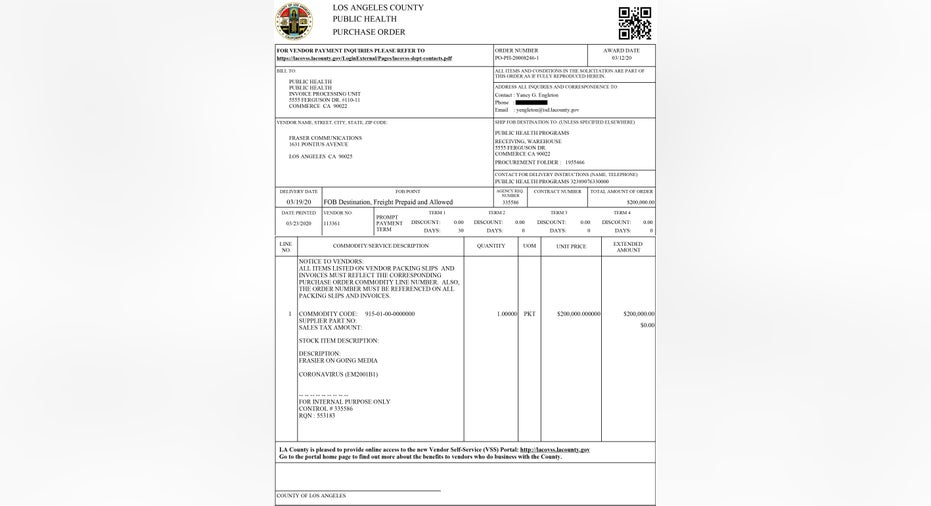 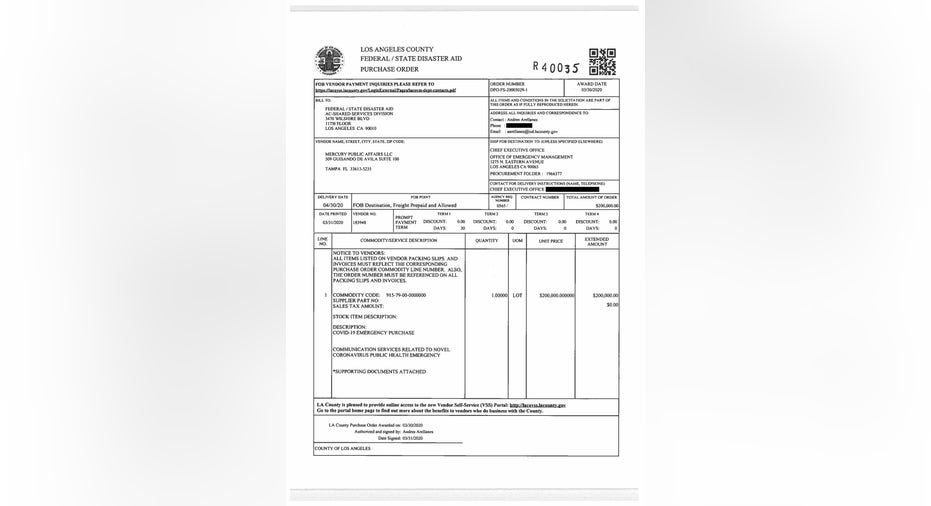 A campaign finance report obtained by FOX Business reveals that Fabian Nunez, a former lawmaker in the California State Assembly and current consultant at Mercury, donated the maximum $1,500 allowed under state law to L.A. County Supervisor Board Chair Kathryn Barger's campaign in February, the month before the company's no-bid contract was approved.

Both Nunez and Barger did not immediately return FOX Business' requests for comment.

On Thursday, Melugin reported that the contracts have now been renewed for a second time. FOX Business' review of the latest contracts show Fraser will receive an additional $1 million in funding through June 2021 while Mercury was extended at the same rate through the end of 2020.

The new contracts were signed off on by L.A. County Public Health Director Dr. Barbara Ferrer and, according to Fraser's contract, will be offset by CARES Act funding through the end of 2020. County funds will pay for it through 2021.

The latest renewals amount to total county spending of about $2.9 million between the firms since March.

A spokesperson for Los Angeles County's Department of Public Health said the spending move was a "necessary decision to bring in additional resources for the massive undertaking of communicating information about an unknown virus in one of the largest, most diverse counties in the country."

"Expanded activities include responding to hundreds of requests each week from media partners, creating and disseminating new culturally and linguistically appropriate educational materials daily through various communications channels, and participating in dozens of briefings each week to provide information and respond to concerns," the spokesperson added.

A Fraser spokesperson said the firm is "honored to contribute to LA County's efforts to slow the spread of COVID-19 by partnering with DPH on strategic communications, media relations efforts, marketing and advertising campaigns in order to reach all LA County communities with the latest COVID-19 news on behalf of Public Health."

Besides the campaign on COVID-19, Fraser has worked with LA County for more than five years on public health campaigns including topics such as anti-vaping and anti-marijuana.

Representatives for Mercury Public Affairs and Los Angeles County's Board of Supervisors and Department of Health Services did not immediately return FOX Business' requests for comment.

Ex-Trump Org Exec Warns What Comes Next: ‘If All Else Fails, He’ll Burn Down The House’