One million Australians to lose their jobs by November

Figures released by the Bankwest Curtin Economics Centre on Tuesday reveal Australia’s unemployment rate will rocket from 5.1 per cent past the 1992 high of 11.1 per cent as quickly as August before hitting 12.7 per cent in May 2021, the highest level since current unemployment reporting began in 1978. 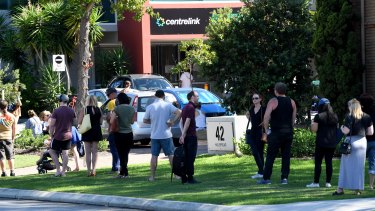 People line up at Centrelink in Perth this week.Credit:Sharon Smith.

That means by November, 1 million will be out of work, on top of the existing 700,000 unemployed Australians. State by state New South Wales would be the hardest hit with more than 350,000 job losses followed by Victoria with 277,000.

The figures were derived by drilling down to impacts at nearly a job-by-job basis.

“We can expect to see a downturn in retail sales (excluding supermarkets) over the coming weeks,” she said.

“Households will start tightening their pockets and look to reduce spending in other areas, anticipating further job losses or reduced hours and income … this will have a flow-on effect to other sectors.”

After hospitality, BCEC predicted arts and recreation, construction and transport would be next hardest-hit sectors, with more than 100,000 job losses each over the next 18 months.

The social-isolation-driven shutdown of businesses was already straining government welfare services, which are struggling to process requests for boosted financial support payments.

Across the country lines of newly unemployed have snaked around bricks and mortar Centrelinks since Monday while Mr Robert said 2.8 million people accessed the website on Wednesday alone.

Professor Cassells said the government’s $550 weekly boost to jobseeker and student assistance payments was a reasonable safety net for workers over the next six months, but for many, it would still mean significant drops in income.

“The most important response by the government now is to take action to reduce activities that will increase the spread of the virus. This will necessarily see demand fall. And we need demand to fall to protect lives in the short-term,” she said.

The ASX is currently awash with companies revoking guidance estimates for the 2019-20 financial year and retailers announcing they were shutting stores.

On Tuesday, listed jewellery giant Michael Hill announced it was shutting its stores due to the pandemic, followed on Wednesday by Accent Group, the retailer behind brands such as The Athlete’s Foot and Hype DC.

Professor Cassells said businesses would inevitably fail thanks to a collapse in investment and consumer confidence and the only way to stage a decent recovery was the right kind of stimulus and, more importantly, an end to the virus.

“When we’re at the point where we feel comfortable we have the virus under control that is the time to really come in hard with a real fiscal stimulus package with infrastructure projects,” she said.

“I think that is what the government will already be planning to do but it is really dependent on how quickly they can get the virus under control.

“It will take something like getting a vaccine or some sort of medication that is going to really reduce the risk of death that people will feel like they can put their heads back up."