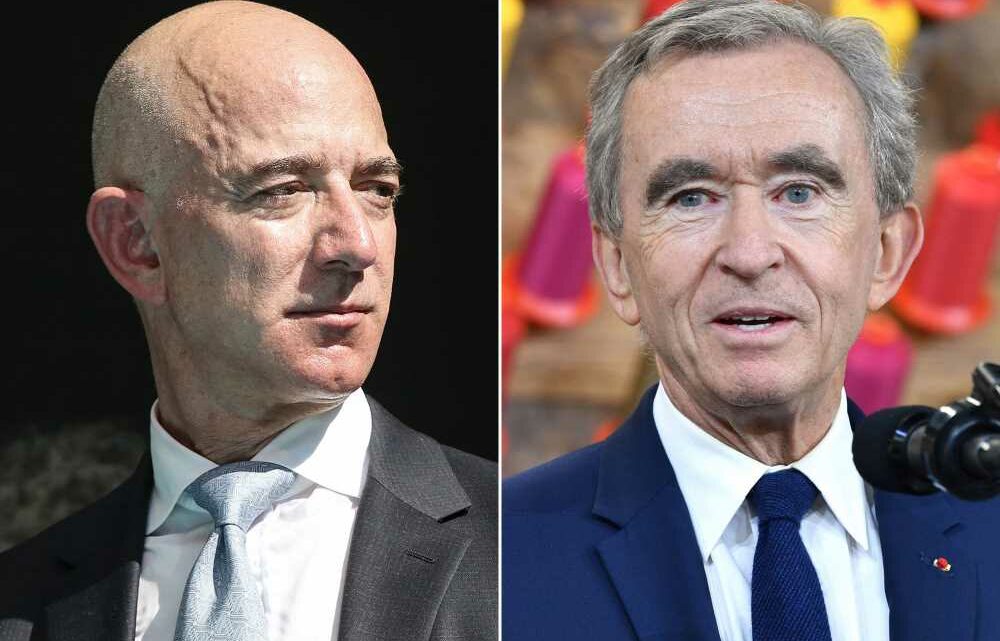 Jeff Bezos is locked in a tug-of-war with French luxury tycoon Bernard Arnault for the title of world’s richest person, with each of them temporarily grabbing the top spot in recent days.

Arnault — head of LVMH, the luxury empire that owns Louis Vuitton, Tiffany and Dom Perignon — held the title as of midday Tuesday as LVMH’s stock closed 0.7 percent higher on the Paris stock exchange while Amazon shares on the Nasdaq were recently flat, according to Forbes’ real-time billionaires list.

Both Arnault and Bezos currently command fortunes of about $188.3 billion, although Arnault has a slight edge over Bezos, according to Forbes.

Arnault on Monday morning had first overtaken Bezos — who has spent most of the past year in the No. 1 spot, trading it occasionally with Tesla CEO Elon Musk. By Monday afternoon, however, Amazon stock had risen by 1.3 percent compared to LVMH’s 1.2 percent, putting Bezos back on top until early Tuesday.

The pair are followed by Musk, whose net worth is currently pegged at $151.4 billion following a recent drop in Tesla shares; scandal-plagued Microsoft founder Bill Gates, whose net worth of $126.3 billion is sure to shrink following his divorce from wife Melinda; and Facebook founder Mark Zuckerberg, who is currently worth $118.7 billion, according to Forbes.

Unlike many other modern billionaires, 72-year-old Arnault made his fortune with old-fashioned retail stores rather than online. He formed LVMH by merging luxury fashion house Louis Vuitton and upscale spirit-maker Moët Hennessy in 1987. The firm is now Europe’s most valuable company and controls a slew of brands like Christian Dior, Givenchy, Marc Jacobs and Celine.

In January, LVMH completed its $15.8 billion acquisition of US jeweler Tiffany and installed Arnault’s son Alexandre as executive vice president. And in February, a LVMH-backed fund took a majority stake in German sandal-maker Birkenstock.

Despite pandemic-related pressure on pocketbooks, LVMH reported record revenue of 14 billion Euros in the first quarter of 2021, buoyed by strong demand from Chinese and US shoppers.

Arnault’s family owns 47.5 percent of LVMH, according to the company’s 2020 annual report.

Bezos, meanwhile has seen his wealth balloon as Amazon has grown at a breathtaking pace during the pandemic. The company reported a 44 percent year-over-year increase in sales to $108.5 billion in the first quarter of the year.

Lankford, other GOP senators urge Biden not to transfer detainees from Guantanamo Bay

There’s a downside to returning to pre-COVID-19 hygiene habits — colds and sore throats are back, doctors say
Technology