There’s a surprisingly easy and profitable trading strategy to use during extraordinary stock-market volatility like now.

There have been six trading sessions over the past three weeks in which the Dow Jones Industrial Average DJIA, +0.82%  suffered a triple-digit loss — including Monday of this week when the U.S. market benchmark shed more than 600 points. Then, on Tuesday, it jumped by more than 200 points.

The way for an investor to respond to such volatility is also simple: Whenever the market’s volatility jumps, hedge your stock holdings. This can be done either by building up cash or using derivatives such as put options. Unwind the hedge when the market calms down.

We’ve been taught for years that avoiding the market’s volatility exacts too high a price. Aren’t the market’s best returns produced in the wake of high volatility, not low?

Nor is 2017’s experience unique, as you can see from the accompanying chart. It shows the stock market’s average gain in the wake of VIX readings that are extremely low, below average, and above average. Notice that equities, on average, perform the best following lower VIX readings. 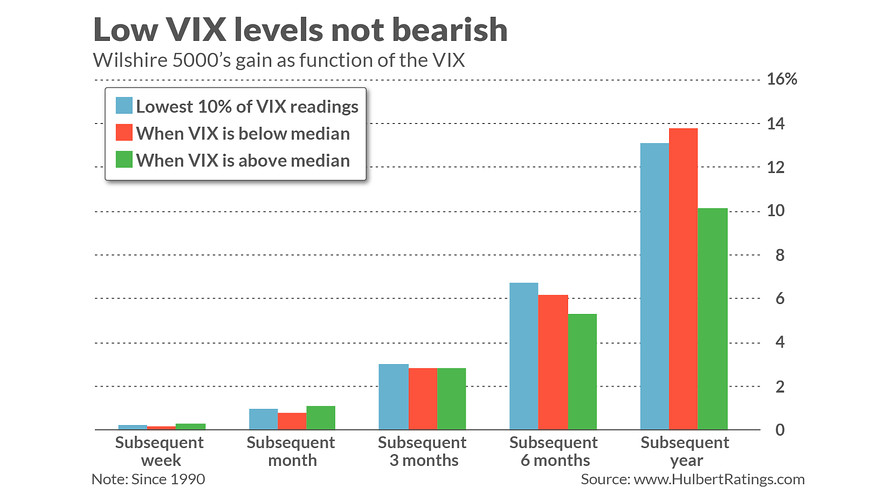 This historical result, coupled with a separate characteristic of market volatility, is what makes this strategy straightforward and profitable. I’m referring to the tendency for periods of high volatility to be clustered. It’s because of this tendency that you can sidestep most of the market’s high-volatility sessions by hedging at their first sign.

The success of this strategy has been documented by a study forthcoming in the prestigious Journal of Finance, conducted by Tyler Muir and Alan Moreira, finance professors at UCLA and the University of Rochester, respectively. An analogy that Muir used in a telephone interview was to airline turbulence: Periods of such turbulence are clustered, which is why it makes sense for the pilot to turn on the “fasten seatbelt” sign and keep it on until there has been a sustained period of calm.

What Muir and Moreira in effect are urging us to do is to fasten our seatbelts at the first sign of stock market turbulence.

What I find so intriguing about this strategy is that it follows what our emotions would have us do. We’re so used to being told that our emotions are our worst enemies, but here’s a case when they are our friend: panicking in the wake of volatility spikes is not a bad idea.

Mark Hulbert is a regular contributor to MarketWatch. His Hulbert Ratings tracks investment newsletters that pay a flat fee to be audited. He can be reached at [email protected]

Related: The Fed’s numbers indicate the S&P 500 may be topping