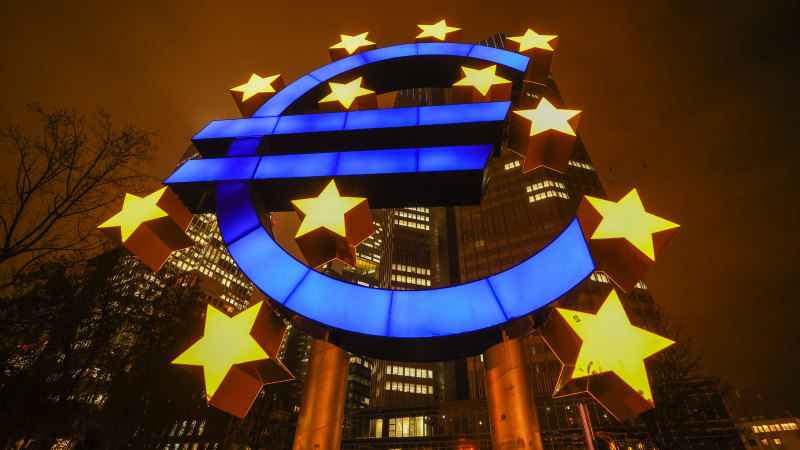 Wild moves in the $US21 trillion ($27.3 trillion) US Treasury market have become disorderly. Shockwaves are pulsating through the international financial system and threaten to snuff out Europe’s economic recovery before it has even begun.

Central bankers have long been fretting over what might happen if incipient inflation and gargantuan debt issuance starts to set off an exodus from global bond funds. They had their first real taste late on Thursday in the US. The implied cost of borrowing rocketed for much of the world economy. 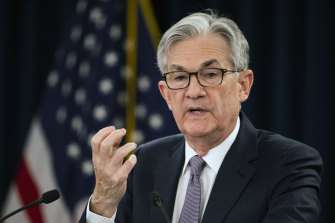 The US Federal Reserve must navigate a narrow strait between the opposite perils of Scylla and Charybdis: damned if it does nothing, and allows the turmoil to continue; but equally damned if it capitulates again, opts for easy stimulus to suppress yields and falls further behind the curve (in the eyes of bond vigilantes).

As matters now stand, the Fed has lost control over US monetary policy. Investors are betting that the overhang of excess M3 money created since COVID-19 began will combine with the Biden administration’s war economy stimulus – 13 per cent of GDP, including the pre-Christmas package – to lift the economy rapidly out of its malaise.

Rightly or wrongly, they are pulling forward an inflationary implication. Futures markets have priced in a full rate rise in 2022 and two more rises in 2023. This is self-fulfilling and will soon start rippling through financial contracts unless corrected.

Put another way, bond traders are dictating policy. They are tightening long before the Fed thinks the coast is clear. So much for the charming idea of “running the economy hot”.

Thursday’s Nasdaq bloodbath was a sight to behold. Ark Invest, the momentum ETF, is down 18 per cent over two days and fast becoming a systemic threat in its own right, epicentre of a nexus of leverage. Saxo Bank warned that the “Tesla-Bitcoin-Ark risk cluster” could set off a toxic feedback loop that sucks other interlinked tech stocks into a downward vortex.

Krishna Guha from Evercore ISI said the Fed leadership was itself partly responsible for the mess. Insouciant language by key officials in recent days has been taken by markets as a “green light to ramp real yields higher”.

Jay Powell, the Fed chairman, misread the mood last week when he stated “rates are moving up because of confidence among markets that we will have a complete recovery”. He seemed to be endorsing it.

Mr Powell is right, in a sense. There has been a flow of good data this week. Durables orders rose 3.4 per cent in January and the jobs figures were better than expected. “It was the nail in the coffin. Investors dropped their sovereign bond holdings like a hot potato,” said Ipek Ozkardeskaya from Swissquote.

But if a gentle rate rise is healthy, a sudden rise is disruptive. Five-year US Treasury yields – the benchmark price of money for corporate bond issuance across the world – jumped 20 basis points in intraday trading on Thursday.

The Bank for International Settlements warned long ago that central banks were sliding ever deeper into a “debt trap”. These concerns were invariably brushed aside as a problem for the future. That future has arrived.

This amounts to a stress test for a financial system that has never been so leveraged to even minor moves in borrowing costs. Pandemic bailouts have pushed global debt to a peak of 355 per cent of GDP (IIF data). Offshore debt has jumped to $US12 trillion. Emerging markets have borrowed exuberantly in a currency beyond their control.

The American economy can perhaps handle higher rates. Europe is infinitely more vulnerable. It has suffered deeper structural damage from COVID and it will take longer to recover due to the glacial vaccine rollout.

“We do not expect eurozone GDP to recover to pre-COVID-19 levels until mid-2022, nine to 12 months later than in the US,” said Chiara Cremonese from Unicredit. “A tightening of financing conditions would risk delaying the recovery further.

But tightening is what Europe is getting. Eurozone bond markets did not import the effect of rising yields from the Trump reflation episode after 2016. German 10-year bunds remained well-behaved and even moved slightly in the opposite direction, taking its EMU satellites with it. 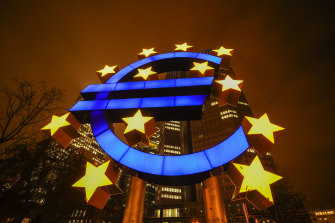 Europe’s struggling economies face a long road back after being battered by the pandemic.Credit:Bloomberg

This time the contagion has been instant. The rise in real bund yields has tracked two thirds of the rise in real US Treasury yields. The European Central Bank’s Christine Lagarde and other key figures have been issuing louder warnings but so far they have been unable to shield the bloc from fallout.

The ECB still has almost €1 trillion ($1.6 trillion) left in its pandemic QE fund. Some of this could, in theory, be deployed fast. The problem is that inflation is roaring back in Germany. Economists insist that this is a temporary distortion but convincing German politicians and commentators is another matter.

The greater the scale of QE bond purchases today, the greater difficulties faced by the ECB system tomorrow if inflation ever does return in earnest. National central banks will start to lose money on their bond holdings. At some point they will be rendered technically insolvent and may have to be recapitalised by taxpayers. This is a political minefield.

This scare is probably no more than a warning tremor as markets adjust to reflation. Emmanuel Cau from Barclays says it is a chance to buy the dip since earnings are beating estimates on both sides of the Atlantic, and funds will migrate from bonds into equities over time. “The taper tantrum episode of 2013 ended up offering a great entry point,” he said.

However, the era of free money is over and we cannot entirely conjure away the costs of the pandemic as if it never happened. The era of the ever-potent central bank bazooka is also over. It was easy to keep printing money or to go deeper into negative rates when the world was in deflation. Whenever there was a market tantrum, the Fed was each time able to reverse course and avert a serious crisis. The markets never complained.

Today, the Fed has to tread a narrower path. The Bank for International Settlements warned long ago that central banks were sliding ever deeper into a “debt trap”. These concerns were invariably brushed aside as a problem for the future. That future has arrived.

A concise wrap of the day on the markets, breaking business news and expert opinion delivered to your inbox each afternoon. Sign up here.