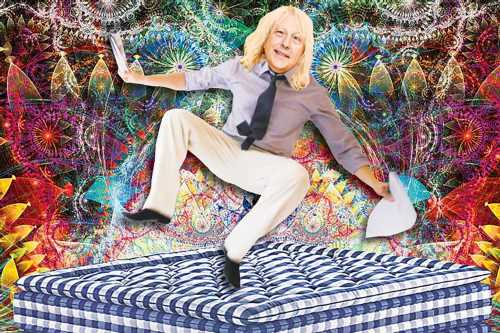 A Swedish mattress maker to the stars is led by a kooky CEO who hires employees based on their “vibrations” and subjects underlings to obscene training videos, a new lawsuit alleges.

Chief executive Jan Ryde has effectively turned his bizarre beliefs into company policy at Hästens, whose iconic checkered beds fetch as much as $400,000 and are owned by the likes of Tom Cruise, Angelina Jolie, Vladimir Putin and the Swedish royal family, court papers say.

Ryde — the fifth generation of his family to run the firm — pressures workers to attend “mindset” training sessions while keeping his personal hypnotist on the payroll to evaluate employees’ “enlightenment levels,” according to the federal lawsuit that accuses him of creating a hostile work environment.

Lizandra Vega, the former Hästens executive recruiter who filed the suit Wednesday in Manhattan federal court, claims she was forced to follow a mishmash of metaphysical philosophies to evaluate job candidates instead of looking to their skills or work experience.

Among them were “Spiral Dynamics” and the “Scale of Enlightenment,” which evaluates people based on their “vibrations and frequencies,” the suit says.

“Shockingly, as part of her job, Ms. Vega was subjected to this barrage of orchestrated belief systems that was meant to and did in fact impact the way she thought and approached all aspects of her life — not simply executive recruitment,” the lawsuit reads.

“Such mind control is akin to forced religious doctrine and has no lawful place in any work environment.”

Ryde’s right-hand man Gregory Downey, who has “increasingly outsized influence over executive decision-making” at Hästens, also allegedly led daily training sessions on vaguely spiritual topics like “intention mapping” or “self-reflection.” While Hästens claimed these sessions were only recommended, they were essentially mandatory because Ryde attended at least one a day and tracked who else was there, the complaint claims.

Despite his woo-woo beliefs, Ryde is a punishing boss who’s prone to cursing out subordinates on Zoom calls and making inappropriate remarks — like his repeated claim that Russian ruler Putin “now kills less people” because he bought a Hästens bed, the complaint says.

The last straw for Vega was a lewd “sales training” video that Ryde sent to more than a dozen senior staffers in November.

The 15-minute clip contained footage of lions killing live prey whom the narrator compared to salespeople while making copious use of the F-word and sexually explicit language, according to the suit.

The narrator also “states that the male lion had to jump in to hunt because he ‘got tired of waiting’ for the female lion that he referred to as a ‘bitch’ to do it,” the suit says.

Vega was one of several employees who complained to Hästens higher-ups about the salacious video, which Ryde “flippantly described” as containing “grown up language,” says the suit.

Ryde then excluded her from emails before she was demoted and then fired in January, which she says was retaliation for her complaints.

Vega’s lawsuit filed by law firm Wigdor seeks a court ruling declaring Hästens’ and Ryde’s practices illegal as well as an unspecified amount of money damages to be determined at trial.

Hästens did not immediately respond to a request for comment Wednesday.

“Hästens’ policing of its employees’ spiritual beliefs is a brazen abuse of corporate power that falls far outside the bounds of lawful employment practices,” Vega’s lawyer Jeanne Christensen of Wigdor, said in a statement. “We look forward to holding Hästens accountable for these disturbing and unlawful practices.”