‘A shot in the arm:’ Victoria backs clean energy in bid to fuel COVID-19 recovery

Clean energy projects will receive a Victorian government funding boost in the hope of driving the state's battered economy out of the coronavirus downturn and avoiding a slump in wind and solar investment.

Victorian Energy Minister Lily D'Ambrosio is preparing to brief 300 investors on Wednesday about the launch of a formal process to test interest in building 600 megawatts of renewable energy capacity statewide, which she said would drive down prices and create new jobs at a critical time. 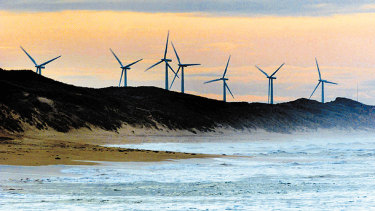 A wind farm at Codrington in south-west Victoria.Credit:Joe Armao

It comes amid calls around the world for "green recoveries" – economic rescue packages targeting investments in clean energy that would tackle global warming as well as stimulate growth. Under the Victorian program, the government would award contracts to buy power from project developers at a fixed price, giving them the revenue certainty to secure debt and proceed with projects in a volatile market.

"It's a shot in the arm for the industry," said Kane Thornton of the Clean Energy Council, a group representing renewable energy firms.

"These sorts of auctions provide a lot of confidence and ultimately bring forward projects that wouldn't otherwise get off the ground because of uncertainty around the energy market."

The government tender process is the second under the Victorian Renewable Energy Target, which aims to lift renewable energy's share of the state's grid to 40 per cent by 2025.

The first tender, launched in 2017, had a target of 650 megawatts but was swamped by bidders and ended up delivering six wind and solar projects totalling 927 megawatts of renewable energy, the government said.

"We know Victorians are doing it tough and affordable reliable power is more important than ever," Ms D'Ambrosio said. "This will help to deliver that as well as creating jobs and stimulating the economy."

Climate advocates say the unprecedented upheaval of COVID-19 presents a once-in-a-generation opportunity to accelerate the energy transition. Mr Thornton said there was now a "massive consensus" in Australia and around the world about the potential for renewable energy to play a leading role in the economic recovery from COVID-19.

"It's clear the Victorian government sees the renewable energy industry as part of the COVID-19 recovery strategy," he said.

At a federal level, the Morrison government is weighing plans for a “gas-led” recovery, which may include underwriting investments in gas infrastructure to drive down the high price of gas for struggling manufacturers that rely on gas for energy or as a feedstock.

Federal crossbenchers have criticised the government's plan for a taxpayer-funded gas-led recovery, as recommended by the Prime Minister's COVID-19 advisory body, saying it is out of step with commitments under the Paris climate agreement to keep global warming below 2 degrees.

Environment Victoria, a peak body for the state' conservation groups, said it was pleased to see the Andrews government focusing on job creation in renewable industries.

"In response to COVID, the smartest governments around the world are stimulating their economies in ways that solve our biggest challenges like climate change," Environment Victoria chief executive Jono La Nauze said.

"Victoria's ageing and heavily-polluting coal power stations won't be around for much longer and it's vital we put Victorians to work building replacements now."

Start the day with major stories, exclusive coverage and expert opinion from our leading business journalists delivered to your inbox. Sign up for the Herald‘s here and The Age‘s here.

Bitcoin Price Still Below $12,000 but BTC Finally Shows Some…

The trick to slashing your student loan interest rate
Technology