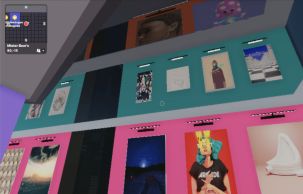 Digital artists and digital art collectors have been having a bit of a field day with an innocuous tweet that went a bit viral.

“I have stolen over 4 terabytes of NFTs via the little known hacker technique known as ‘right click -> save as’. My collection has a net estimated value of over 8 trillion dollars,” says Lauren L. Walker, some baseball podcaster.

Presumably she just heard of NFL NFT-ing and maybe they missed the 2018 story of Dodgers giving out some crypto tokens, but she received a reply that maybe speaks of our times:

The reply has of course been NFT-ed and someone is willing to pay more than $5k for it. The NFT is a screenshot of course, but it clearly becomes something else when it is tokenized.

What is that something? Well fundamentally an NFT is proof of originality. We have here a pretty original moment, and all of us can screenshot it, even NFT it, but almost all of us will not bother.

This guy did bother, and if we knew we’d get $5k for it, we’d all bother. But, we don’t think we’re gone get anything for it now, so almost none of us will bother.

Thus this NFT, although plentiful technically, practically is rare and that applies to pretty much all art, including digital art, as time and effort as well as skill necessarily impose scarcity.

If we travel say 20 years in time thus, and we want to brag to our children or we want to tell the story of how we saved art, a clown pepe making a witty comment at a moment when the world – including many cryptonians themselves – are grappling with whether these are a thing, the ‘I deleted your job’ NFT in a way it can be proved it was made in that moment 20 years ago and has been unchanged since, is perhaps one picture in that story of early digital art history.

Is this art? Well, it looks like it. Made us stop anyway and examine it for a moment. As you might know in Decentraland, it’s like entering a real art gallery. At first the art works are small, then you can get pretty close.

Once you get very close, you can see whoever has made this has spent quite a bit of work to play with the elements so to speak in presenting different lights, different shades of color, to reflect… well that can be whatever you want. We’ll say the modern busy highway crossings.

That experience of wondering around and finding new things, of getting so close to a painting that you’re almost in the painting, is pricless.

You can barely see above there’s a massive painting of a man holding the hand of a woman with a huge bitcoin sign in the background.

Closer, we have the moon girl astronaut, colorful and pleasing. In front we have some weird thing that we don’t quite want to look for long.

Getting closer to the art work gives you a different experience. The bitcoin miner above for example, we stumbled while walking around. When we turned, we were a bit stunned looking at that huge figure with the bitcoin key and stayed staring for a bit as at that moment we didn’t know it was meant to be a bitcoin miner, so we were trying to make sense ourself.

That’s art, of course. If not the paintings themself, then certainly the experience, an experience that can’t quite be replicated.

We’ve taken screenshots here for example, and simplistically you can say we have the works now so why pay for them. However looking at the screenshots and remembering what it was like when we were there, the screenshots are lifeless.

The art in there is instead real. You can feel it. It ‘talks’ and reveals itself. It does so far far more than any experience we have had in a physical art museum or gallery.

We haven’t been to the best, Tate Modern, and quite a few times. Each time, lifeless might be a harsh word but, too many portraits of kings and queens or somewhat insulting and outraging, demeaning even displays like just a banana.

That speaks, or spoke, both of decay and of one of art’s function: propaganda. On decentraland instead you have actual art that is new, original, fun, inspiring and above all, liberating.

You feel you are in the future and observing an utterly exclusive display, all just for you. That just for you is felt because you can roam around and find things, surprising things, serious things, fun things with some of our time there taken to play racing games.

One day perhaps this too will decay and fall into the trappings of art being used to enslave rather than liberate, but for now, they are precious moments of the people speaking to the people with almost no barriers to entry but time, skill and effort.

We have saved art, perhaps, and the best part is this has just began as the capabilities of this new code world are barely explored.

One can even, perhaps far too ambitiously, suggest it is the dawn of renaissance in some ways where the timeframe of digital creativity is concerned with hopefully a lot more to be enjoyed as millennials carve the path to uplift man.

Some thus are now deaf to the suggestion that this new world is not rare, or can be copy pasted, or that their efforts are futile.

Not least because they had the vision and foresight to create at least in Decentraland pretty much all one would have wanted as a first introduction.

There’s obviously more that can be done, but the idea of paying $100,000 for some pixels that is now virtual land sounds silly no more because we want some pixels for our own office, but poornodes.

Some therefore may now be moving to conviction, beyond is there something here to there’s is obviously something and it’s pretty cool.

It is also worth money certainly where the land is concerned because supply and demand, but also in regards to some of the art work which extends to fashion or wearable NFTs for your avatars.

Ours looks rubbish, but others have some pretty cool avatars that may lead to people wanting to be friends and talk.

In short, for those lucky few that have found the way, this may be a bit like reddit 2010 or hacker news 2008-ish, back when it was cool and full of smart people that had ambition, vision, and of course upheld principles, before their corporatization and sedation.

It’s a new playground that takes you to a new world where the sort of people themselves and what they have expressed and are expressing is invaluable.

You can’t steal this, not while we are in charge anyway. You and we can only steal from entropy to turn it into energy by creating this new world and making friends on the way, a world that finally provides a new space for expression and for something far more valuable than money: that touching of beauty.