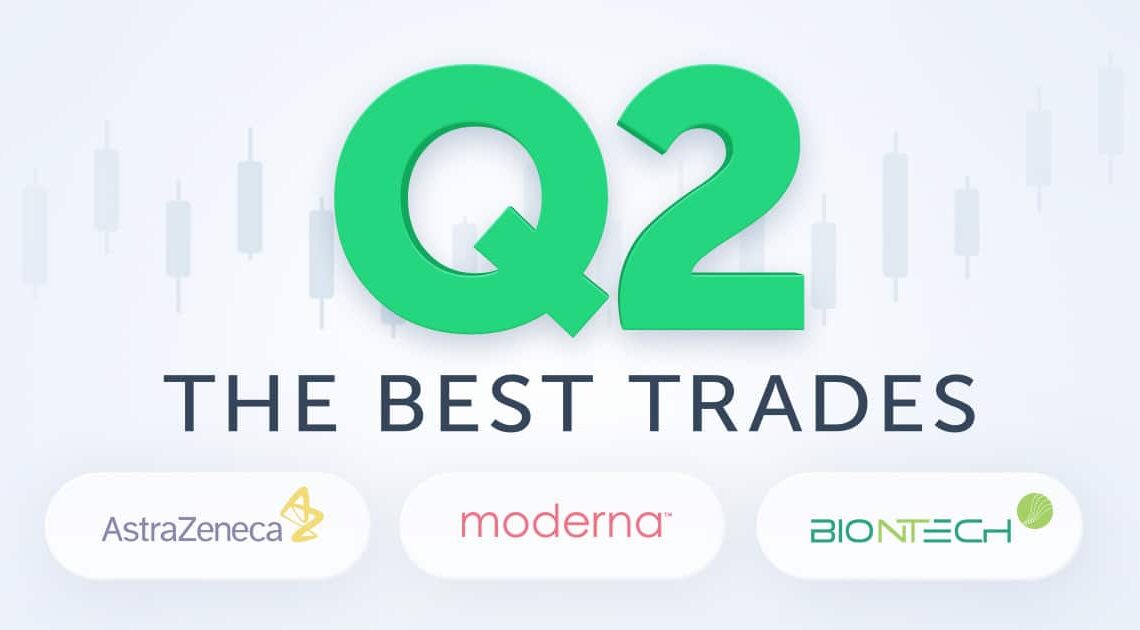 What were the best trades of Q2?

Today we are going to review the best deals of the second quarter. For the global economy, it was a time of recovery, of reopening after the pandemic, and for some people it was a time to count their income.

So, the number one best deal in Q2 had to do with shares of BioNTech, with an actual profitability of 1026%.

That is how many times the investments of those traders who bought shares of this company in the second quarter increased.

By opening a deal to buy on April 1, and closing it on June 30, traders earned $115 on each purchased share. It was enough to invest 11.2 dollars in that.

Nominally, the shares have grown by 226% in 3 months, which is a phenomenal result in such a short period.

That’s why the deals with BioNTech deserve the first place in our rating.

In second place we have deals with shares of the American company Moderna, with a profitability of 763.6%.

Having invested only $13.2 in April, traders could get $100.8 on each purchased share. Nominally, the shares rose by 176.2% in the second quarter, and this is an incredible result, albeit quite predictable.

And in third place…

In third place are the deals with the pharmaceutical company AstraZeneca.

The profitability amounted 412.5% for the three months in this quarter. The only disadvantage of investing in AstraZeneca is the high share price.

The advantage in return is a high profitability and an impressive amount of income on each purchased share.

Traders who traded with AstraZeneca shares in the second quarter received an unbelieveable $1,487 in profit per share with an investment of $361.

Just one deal of one lot in April meant that three months later you could have $148,700 on your account instead of $36,100. How is this possible? With SuperForex you can trade AstraZeneca shares.

Thus, we can see that the pharma group of assets and direct investments in companies that are engaged in the production of coronavirus vaccines are beginning to yield results.

Despite all the incidents with vaccines, pharmaceutical companies are reaping juicy profits in 2021. It was predicted for a long time that the companies mentioned above are becoming very promising due to the pandemic, and Q2 proved that to be true.