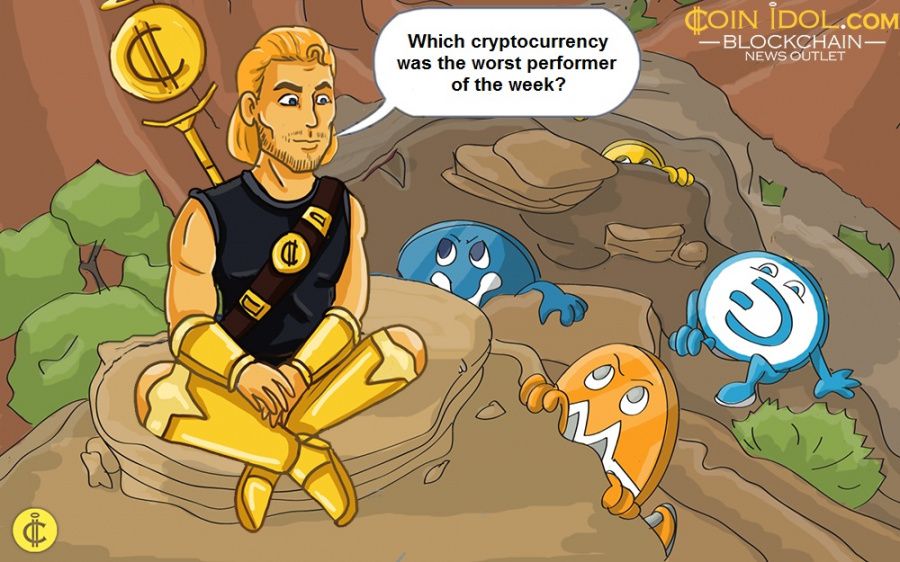 Virtually all of the worst performing altcoins are trading in the downtrend zone. This is a sign that the bears are controlling the prices. Altcoins have not been able to recover.

The bears sell on every upward correction. The selling pressure will continue if the bears break more support levels. These are some of the altcoins:

Dogecoin (DOGE) is in a downtrend. The cryptocurrency has been declining since October 29. Dogecoin has crashed from a high of $0.30 to a low of $0.17 at press time. It was the worst performing altcoin last week. DOGE/USD has consolidated above support at $0.15. The upside is encountering rejection at the high of $0.22.

For example, DOGE rose to the high of $0.22 on December 14, but was rejected. The altcoin fell back to the support of $0.15. In the downtrend from November 26, a candlestick tested the 78.6% Fibonacci retracement level. The retracement suggests that DOGE will fall to the 1.272 Fibonacci extension level or the $0.16 price level. The cryptocurrency have the following characteristics: 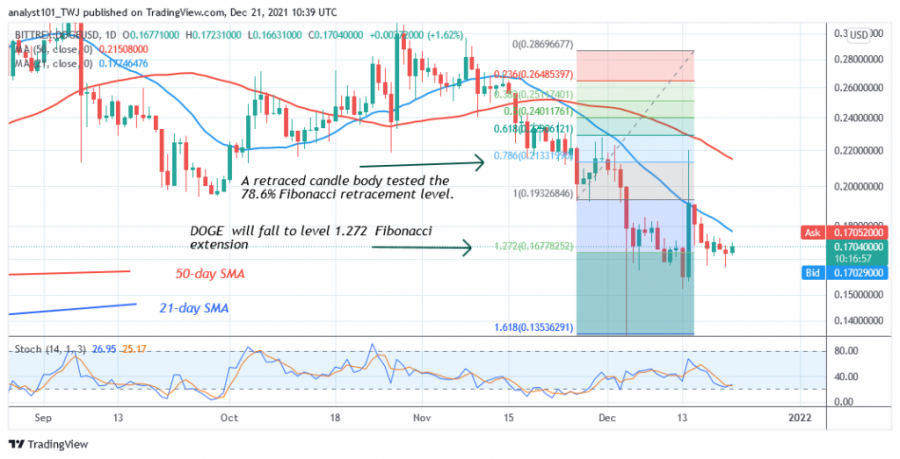 Gala (GALA) is in a downtrend. On November 26 Gala hit a high of $0.84 but the market reached overbought territory. Sellers emerged and pushed prices down. The altcoin fell below the moving average and reached the low of $0.44. There is a probability of further downward price movement.

Meanwhile, a candlestick tested the 61.8% Fibonacci retracement level on December 26. The retracement suggests that Gala will fall to the level of 1.618 Fibonacci extensions or the price level of $0.21. It is the cryptocurrency with the second worst performance. It has the following characteristics: 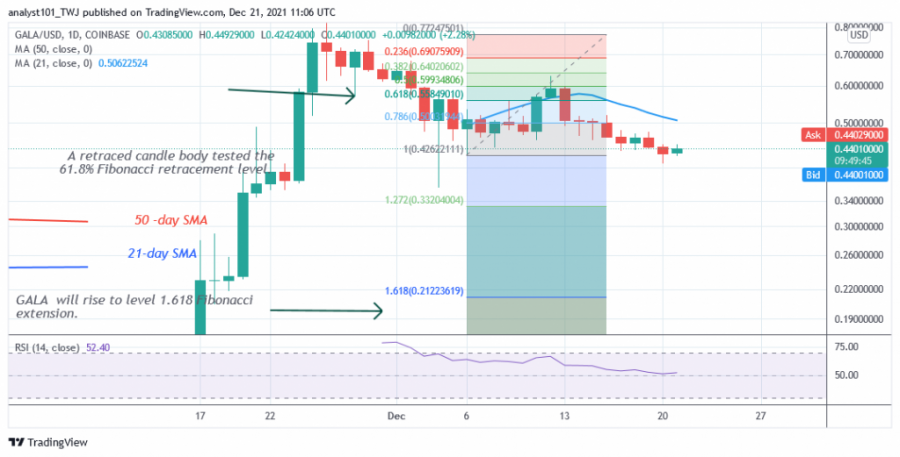 TRON price corrected higher to retest the overhead resistance. On the second rejection, the cryptocurrency has not recovered as selling pressure continues. The cryptocurrency seems to be the third biggest loser of the past week. It has the following characteristics: 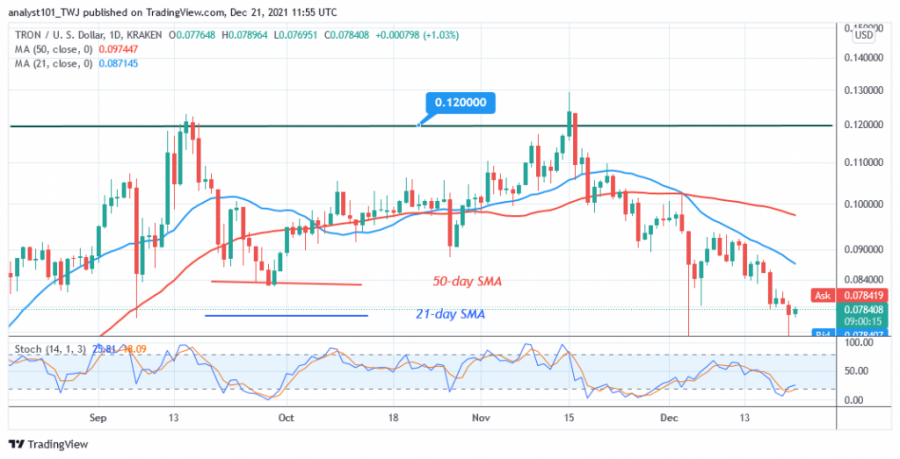 Internet Computer (ICP) is in a downtrend. The initial decline took place above $40 support. The altcoin consolidated above the $40 support for over two months before another decline began. The cryptocurrency has resumed a downward move after being rejected at the $52 high. The rejection causes the altcoin to hit a low of $21.

Meanwhile, the downtrend from October 27 has shown a candlestick testing the 61.8% Fibonacci retracement level. The retracement suggests that ICP will fall to the level of 1.618 Fibonacci extensions or $11.07. The altcoin was the fourth biggest loser in the previous week. The cryptocurrency has the following characteristics: 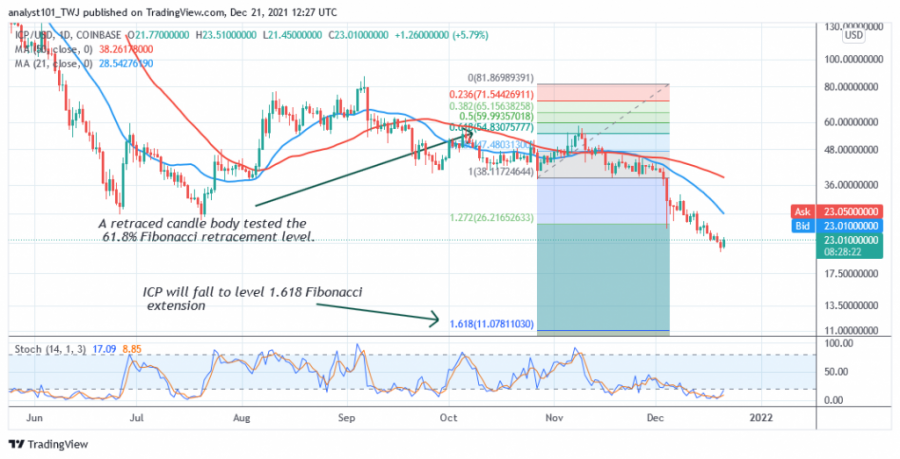 eCash (XEC) is in a downtrend. The cryptocurrency was previously in an uptrend. In the previous uptrend, the market rose to the high of $0.0003796. The altcoin was rejected because it reached an overbought region of the market. Today, eCash has fallen to the low of $0.0001086. Selling pressure may be easing as the market has reached the oversold region of the market. The cryptocurrency was the fifth biggest loser in the previous week. The altcoin has the following characteristics: 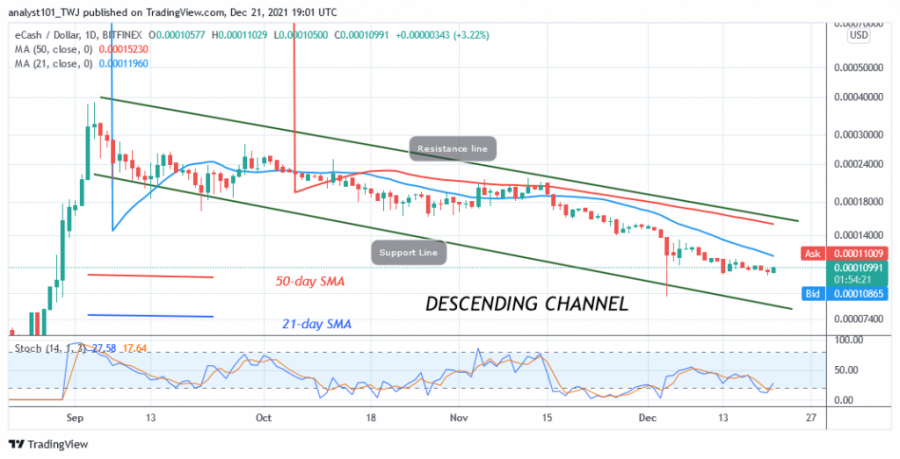 Disclaimer. This analysis and forecast are the personal opinions of the author and are not a recommendation to buy or sell cryptocurrency and should not be viewed as an endorsement by Coin Idol. Readers should do their own research before investing funds.

Bitcoin has lost the plot
Technology