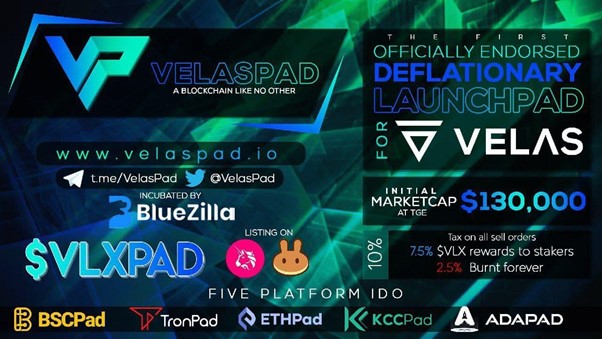 The recent launch of VelasPad (September 22) sent shockwaves throughout the crypto and blockchain industry. Not only is the launch itself a significant development for the industry – being the first launchpad built for the Velas blockchain specifically – but the VLXPAD token is popping off across the platforms supporting it.

With over $340,0000 collected in fees after just day one, and the price rising to a staggering 133x above IDO levels, demand for VLXPAD is ramping up quickly. There are multiple reasons to be excited about the launch of VelasPad. BlueZilla Group, the team behind this venture, sees tremendous potential in the Velas blockchain. Ensuring up-and-coming projects can organize initial raises in a convenient yet incubating environment elevates that potential even further. Additionally, VelasPasd helps projects become part of the Velas Grant initiative, currently valued at $5 million.

It is an essential platform to help build the next generation of DeFi, applications, products, and services. VelasPad has over 40 grant candidates lined up already, with more to come as time progresses. Fueling and nurturing growth and development are essential facets of what this platform brings to the table for the Velas ecosystem. It is also part of a cross-chain effort that spans Velas, Binance Smart Chain, Ethereum, Tron, and Cardano.

The excitement regarding VelasPad is also fueled by the spectacular price momentum of its VLXPAD token. That token has successfully risen in value to offer a 133x return on investment to those who joined the token sale, and that is only the beginning of what is yet to come!

As a result, over $344,000 has been collected in trading fees, thanks to a 10% tax on sales (not buy transactions). Three-quarters of those fees are redistributed as Velas tokens – VLX – to VLXPAD stakers, with the remainder burnt forever to reduce the total supply. As a result, VLXPAD is a revenue-generating deflationary token that powers one of the five biggest launchpads in the blockchain space today.

Per DEXTools, Velaspad’s VLXPAD remains in high demand for crypto traders as it is trending #2 on the platform and is of increasing interest to CoinGecko users. The project has attained a market cap of over $32 million and boasts an impressive $4.53 million in 24h trading volume so far.  As its token supply will keep decreasing over time, there is a very high chance the VLXPad price is entering the accumulation zone now before the next big leg up. That price breakout could send the price to $1 or more, doubling the current all-time high rather easily.

There is another reason to border on the line between hype and FOMO, as the first IDO on VelasPad has been announced.

A major announcement shortly after launching the platform, and one that will bring more attention to this ecosystem and the VLXPAD token. Interested users can acquire VLX from Uniswap and PancakeSwap to start earning juicy rewards from providing liquidity. Furthermore, the staking of VLXPAD is slated to go live one week from today to introduce even better rewards to all users.

With so much in the works, what could be next for VelasPad and the Velas ecosystem?