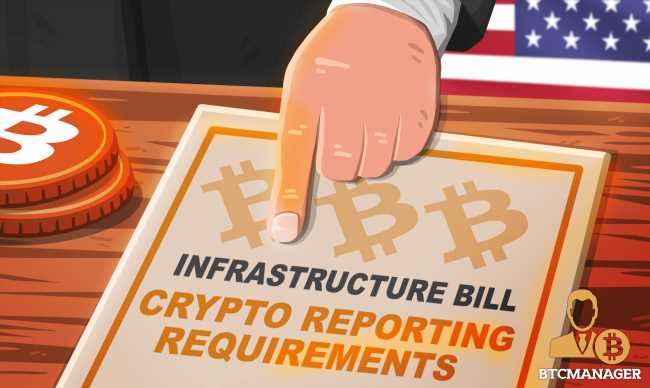 The White House has made its stand on a newly introduced amendment to the Infrastructure Bill whereby it acknowledged it. Crypto advocates argue that the language in the legislation, which requires brokers of digital assets to report on crypto trading gains, is vague. And now, amendments are circulating to narrow the scope.

The New Provisions to the Infrastructure Bill

There have been debates on the bill’s provisions, which will raise money through stricter tax rules on cryptocurrency transactions. To raise funds for the $1 trillion bipartisan infrastructure proposal, the Senate has introduced a clause that would impose harsher limits on how digital assets are taxed.

In the newest version of the bill, unveiled last Sunday, the provision would require crypto “brokers” to provide exact details about crypto transactions, like price points from when customers bought in and sold. In addition to reporting transactions over $10,000 to the already compulsory Internal Revenue Service (IRS).

The change to the “broker definitions,” specifically excluding validators, hardware, software manufacturers, or protocol developers, was presented on Wednesday to the Senate by senator Rom Wyden, Pat Toomey, and Cynthia Lummis. Such an amendment is not acceptable. If it is passed, it will be a victory for the crypto supporters.

However, based on previous amendments described by the R-Ohio-based Sens. Rob Portman, some believe it will pave the way for a more extensive definition of “crypto broker” to impose additional taxes on crypto investors potentially.

The Joint Committee on Taxation estimates that the crypto reporting provisions now included in the bill will produce revenue of $28 billion and pay around 5% of the entire cost of the measure.

The government believes that this provision will improve tax compliance and guarantee that taxpayers contribute what they owe under the Act in this emerging financial field.

Unanticipated but not surprising describes the last-minute endorsement for the Portman amendment. Since its foundation, the objective of the White House for the Infrastructure bill has been to support upgrades for corporations and the wealthiest Americans. However, the Republicans of the Senate have a different viewpoint and have reduced tax rises one by one in the past three months.

Causing Quite a Frenzy

The minimal amendment has received many comments from crypto enthusiasts, with most of them condemning the bill. They are holding on to the fact that the proposed amendment will catch up with proof-of-stake networks and software developers.

The reporting restrictions on crypto and its associated taxes are the latest remnants of tax increases to pay the bill. If the Portman camp wins, Blockchain Association executive director Kristin Smith warns the ramifications will be sweeping and massively damaging to the country’s crypto industry.

Jealous student jailed for 11 years for running over his girlfriend