The token, which was airdropped to past Uniswap users in batches of 400 per wallet without warning yesterday, has defied predictions that the market would crash from its initial pricing of $3 as the 75,235 users who have claimed so far raced to dump their free coins. Instead UNI has establishing a trading range of between $2.60 and $3.80 over the past 12 hours.

UNI, the governance token of the decentralized exchange (DEX) Uniswap, has emerged from its first 24-hours of trading as a top-65 ranked crypto asset by market cap.

According to DeFi Pulse,Uniswap has also leapt up the rankings to become the second-largest DeFi protocol by total value locked (TVL), representing $1.32 billion in locked funds. Uniswap’s TVL has increased by nearly 75% in 24-hours following the announcement of UNI liquidity mining incentives.

But not everyone is surprised by UNI’s impressive performance, with various predictions on social media that it will continue to climb the rankings:

Within a single day, UNI has already been listed on more than one dozen exchanges, is featured in nearly 40 pairings, and has driven more than $1.8 billion in volume. It ranks as the seventh-most traded crypto asset of the past 24 hours above Litecoin (LTC), Tron (TRX), and Chainlink (LINK) according to CoinGecko.

As of this writing, UNI is changing hands for $3.33 and boasts a total capitalization of $217 million. With CoinGecko estimating that 70 million tokens are in circulation from Uniswap’s one billion max supply, the token’s current valuation would give UNI a fully diluted market cap of $3.34 billion.

CoinGecko ranks Uniswap as the 16th-largest DeFi token by capitalization, sitting below Kyber Network (KNC) and above Balancer (BAL). 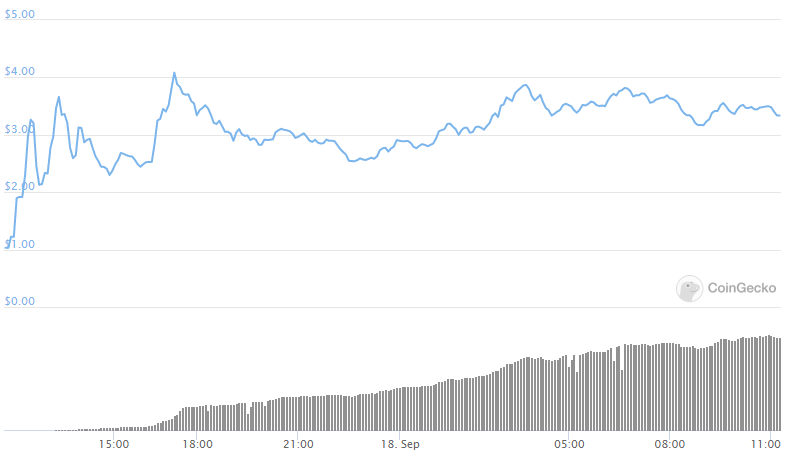