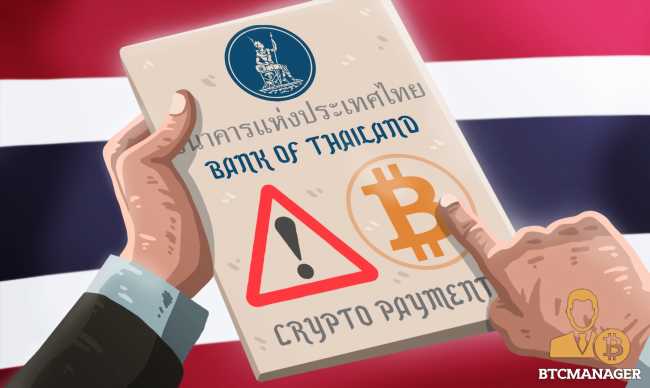 The Bank of Thailand (BOT) has issued a warning against using digital assets as a payment method, stating it could work with the country’s Securities and Exchange Commission (SEC) if crypto payments become widespread.

BOT Against the Widespread Adoption of Crypto for Payments

The BOT made the warning in a press release on Thursday (July 8, 2021). According to the Thailand central bank, the use of digital assets as a payment means posed certain risks to the payer and the recipient, such as money laundering, price volatility, and cyber theft.

Also, the BOT noted that businesses were beginning to accept cryptocurrencies such as bitcoin and ether for payments of goods and services. Meanwhile, the apex bank reiterated that it did not recognize these digital assets as legal tender in Thailand.

The BOT added that “doing so constitutes barter trade between the owner of the digital asset and the provider of goods and services, where the payer and the receiver mutually accept all risks involved.”

While the Thailand central bank is warning against the use of crypto for payments, the BOT, however, is ready to apply some regulatory measures if such adoption becomes widespread.

An excerpt from the announcement said:

“Should the use of digital assets as a means of payment for goods and services become widespread, the BOT will coordinate with the Securities and Exchange Commission (SEC) and other related agencies to take the necessary measures to ensure that they do not pose extensive risks to the general public or the economic and financial system.”

The BOT becomes the latest central bank to warn against using digital assets for payments. As previously reported by BTCManager in June, the Bank of Indonesia banned the use of crypto as a payment method. The Central Bank of the Republic of Turkey also took similar action.

Meanwhile, the BOT said that it was still working on issuing a central bank digital currency (CBDC), and on formulating policies for stablecoins. The BOT earlier revealed plans to regulate stablecoins in March but said it would work with market participants and relevant stakeholders before releasing a final regulatory framework.

Thailand has been known to issue policies for different aspects of the crypto industry. Earlier in the year, the Thai SEC announced a proposed rule that suggested investors must have a minimum of 1 million baht ($30,696) to invest in crypto.

However, the proposal received backlash from stakeholders in the country, who believed that the rule would exclude middle and low-income earners from the cryptocurrency market. The Thai SEC issued a clarification on the matter, stating that there was no intention to implement the qualifications stated in the proposal.