The people of Switzerland might give the world a bigger shock than Brexit and Trump combined after a people’s initiative is now to go through a binding national referendum on June the 10th 2018.

Years in the making, a group of economists has managed to reach the stage where an entire nation is now to debate the matter of money more than a century since they last did do so during the abolition of gold money.

Their proposal is the separation of money and debt, requiring commercial banks to no longer create money out of nothing. Reserving that function to the Central Bank alone.

In modern monetary systems, contrary to what textbooks have told us for years, banks create money by issuing loans, not by multiplying deposits.

Thomas Jordan, Chairman of Switzerland’s Central Bank, says: “When a bank provides a loan, it credits the amount in question to the borrower in the form of a deposit to his or her account. This leads to an increase in credits on the assets side and in customer deposits on the liabilities side of the bank’s balance sheet.”

In effect, they’re printing money. The loan they lent, now becomes their asset. While deposits with commercial banks are not even legal tender, a mere IOU from the bank to you which, as the Cypriots found out, can lead to default.

The Sovereign Money initiative wants to replace this with a system where only the Central Bank can create money, something which has never been tried in a modern economy and is opposed by the banks and lawmakers.

The matter is now, however, only for the Swiss people to decide and them alone. In aiding that decision Central Banks do need to explain one matter, the role played by interest payments on loans created by commercial banks.

Neither the Bank of England, which was first to somewhat clarify the modern money creation process, nor the Swiss Bank, has touched on that subject, even briefly. Because if those interest payments are in effect themselves money out of nothing, then it might amount to money printing squared, leading to ever increasing property and asset prices. 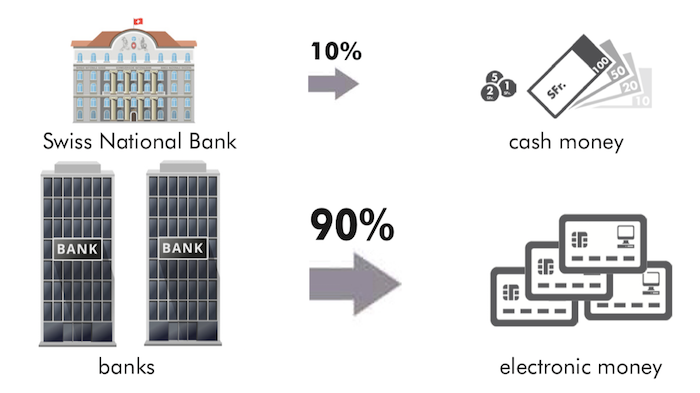 The proposal in question is radical, but its basis are a century old, arising out of the Chicago School. An IMF working paper on a somewhat similar proposal summarizes it as follows:

“At the height of the Great Depression a number of leading U.S. economists advanced a proposal for monetary reform that became known as the Chicago Plan. It envisaged the separation of the monetary and credit functions of the banking system, by requiring 100% reserve backing for deposits.

Irving Fisher (1936) claimed the following advantages for this plan: (1) Much better control of a major source of business cycle fluctuations, sudden increases and contractions of bank credit and of the supply of bank-created money. (2) Complete elimination of bank runs. (3) Dramatic reduction of the (net) public debt. (4) Dramatic reduction of private debt, as money creation no longer requires simultaneous debt creation.

We study these claims by embedding a comprehensive and carefully calibrated model of the banking system in a DSGE model of the U.S. economy. We find support for all four of Fisher’s claims. Furthermore, output gains approach 10 percent, and steady state inflation can drop to zero without posing problems for the conduct of monetary policy.”

Output gains of 10%! Sovereign Money, however, goes further. It proposes completely debt free money creation. So that instead of banks gaining all the benefits, when the Central Bank needs to create new money, that block reward goes to the state, and thus to taxpayers. As opposed to now where it remains a mystery where $3 trillion of new money went.

But, as appealing as this proposal sounds, we are not yet fully decided because how the currency system works has not yet fully been explained by Central Banks.

We default to assuming whatever there’s in place is there for a reason, and until such reasons are illuminated, explaining where these fiat block rewards go, what role interest plays in money creation, and why government debt would be reduced, we are not quite in a position to decide and would therefore have to default in favor of the Sovereign Money proposal as it would be more transparent.

There’s a long way to go until June however, and whatever the outcome, at least the topic of money will once more finally be on the political agenda so that the free people can freely decide just how the most fundamental aspect of any economy should work.