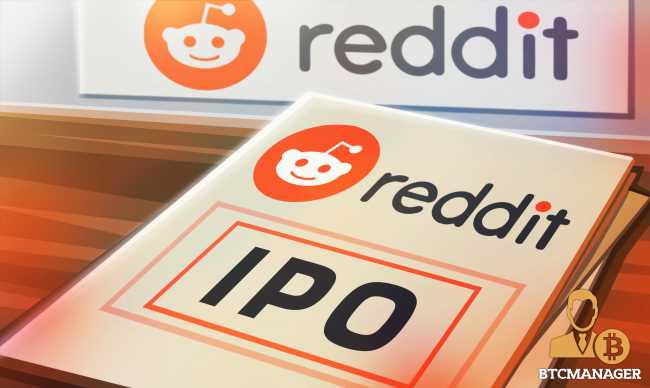 Reddit Files For an IPO with the US SEC in Confidentiality

Earlier this week, interactive social media platform Reddit announced that they had filed for an IPO with the US SEC to allow the public to invest with them. They also said that even though they were through with the application for the IPO, they did it in confidence to the SEC only.

Reddit Plans To Open Its Shares For Public Investment.

Reddit, the home of two digital assets,Moons and Donuts, filed for an IPO with the SEC yesterday. However, the company decided to use a method that would keep trolls at bay until the SEC’s final decision. The company privately filed for this IPO and did not offer further details regarding the number of public shares and their price ranges.

The social media platform serves about 52 million users each day and has over 100k active online communities. These members use the Reddit tokens to tip each other, and they also help in other administrative purposes on the platform. Redditors also use these tokens to make their accounts look cooler and unlock special features within the platform.

The need for Reddit to start by seeking an IPO and the listing by SEC could be due to the looming crypto regulatory uncertainties. Currently, the crypto market is in doubt since no one knows what may happen in the future regarding the regulation of these assets. Therefore, many crypto organizations are focusing on reducing the risks of ‘unfair’ regulation.

In November 2021, eTORO suspended trading of ADA and Tron for US citizens due to the fear of regulations. However, it is time to tell whether the same fears drive Reddit.

Reddit was co-founded by Steve Huffman, Alexis Ohanian, and Aaron Schwartz in 2005. With time, the company grew due to its signature meme-stocks and chat groups that edge out other social media giants. However, the company has never tried to go public even though some rumors of its possibility.

In March 2021, the first signal of Reddit going public came after it hired Drew Vollero as its first CFO. Drew was the CFO of Snap when the company sought to go public. However, the company did as its ‘tradition’ dictates and hoarded information regarding his role there.

In August, Reddit raised $700million from a funding round, and its new market capitalization hit $10 billion. The company also said that in Q2 of 2021, it collected $100 million.  This amount is about 192% of what it made within the same time in 2020. In September, Reddit announced hiring professionals to help them draft the IPO but withheld further details.

However, its  CEO, Steve Huffman, said it would eventually go public even though he did not give a specific date. Whether this step by Reddit is due to fear of regulation or not, it’s up to time to tell.