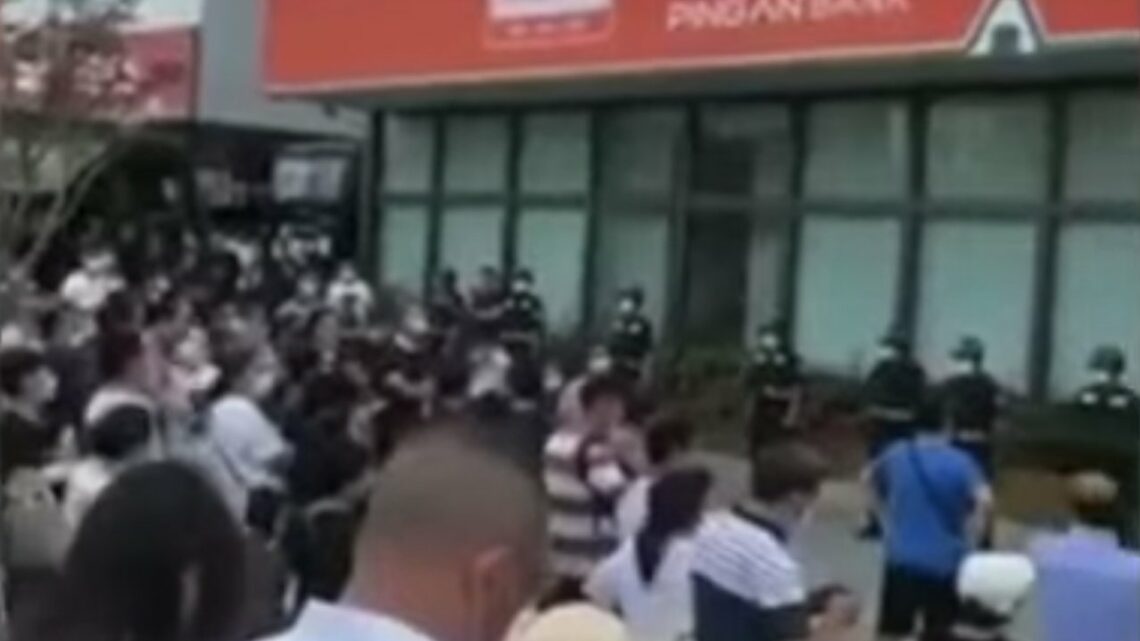 Protests Break Out at Ping An Bank

About 200 people gathered in front of one of China’s more promising up and coming Fintech company, Ping AnBank, to protest this Thursday with chants asking for their money back.

These are creditors of Sichuan Languang Development, one of the largest real estate company in western China.

That has halted work on unfinished real estate, with the crowed there shouting: “PingAn shameless, publicly misappropriatingLanguang owners supervision funds,” with chants of “repay the money.”

Owner here presumably means real estate owners rather than stock owners as on social media videos, as pictured above, they look like fairly ordinary Chinese citizens.

They probably paid down for a property in anticipation of its completion, thenLanguang defaulted on bond holders in July, with PingAn then accused of trying to frontrun retail creditors by taking funds that were meant for completing properties for which these protesters have paid down upfront.

That makes this the first protest of its kind, as far as we can recall, in China’s 30 year boom that began in the 90s and took off in 2008.

Since 2019 however, troubles have been brewing. In that year there were a few small bank bailouts, raising whispers as to whether cracks were developing.

In 2020, corporate bond defaults began to increase. This year they grew further in size, with the biggest such default since 2008 seemingly imminent.

Evergrande has missed a bond payment to American and European bond holders, with some of these creditors retaining lawyers. There’s whispers they may deliver a notice if in about two weeks this officially becomes a default.

Under British law, such notice begins bankruptcy proceedings where the assets are distributed according to a pecking order with employees and their wages having first priority, then secured creditors followed by unsecured creditors that come last.

There is usually no distinction between foreign or domestic secured, unsecured, or employee. They’re treated the same under those mentioned categories.

However there are rumors China will make a distinction between onshore (domestic) and offshore (foreign), which may have led U.S. Secretary of State Antony Blinken to say China should act “responsibly” when it comes to addressing the potential impacts of China Evergrande Group’s financial crisis.

More concerning than any political impact such distinction may have would be the market’s reaction to a potential new understanding that foreign investors and their money doesn’t count.

Such miscalculation risks turning what could be a painful but managed recession into the mother of all crashes as all foreign investors might rush to get out, with Chinese investors doing so too in anticipation.

Jerome Powell, Fed’s Chair, has stated an investigation of US banks suggests any fallout would be contained to China. There are US and European companies with exposure, but they’re very small compared to the exposure Chinese companies have to the property market there.

A property market that has been falling with Chinese stocks also now technically in a bear market after dropping 20% this year.

All those funds taken out of China will have to find a new place. As such, America and Europe may take off just like China did in 2008. From the experience in this space for example, when China banned crypto exchanges in 2017, the crypto market in China temporarily went into a depression of sorts but the global crypto market boomed.

Bitcoin has also been rising recently, probably in part because the Chinese central bank has began printing about $10 billion a day.

That might assist where liquid trading assets are concerned, but now the property market as a whole seems to be in distress in China, to the point we have the first protest in front of a bank.

For some that might echo the depositors’ lines in front of Northern Rock in 2007 before banks blew up, but whether this can be managed and whether the Party can avoid any dire mistakes, remains to be seen.