No, Jack Dorsey isn't trolling ETH by making its logo the Ethiopian flag

Crypto Twitter was united in amusement today when the hashtag #eth began to automatically show the Ethiopian flag as the Ethereum ‘logo’.

Given Twitter CEO Jack Dorsey’s love of Bitcoin and the fact Bitcoin has its own Twitter icon many wondered if Dorsey was subtly trolling Ethereum (ETH). After all he’s a staunch Bitcoin (BTC) maximalist that has refused to consider buying into ETH and other altcoins on multiple occasions and has repeatedly stated that Bitcoin will become the internet’s native currency.

The Twitter and Square founder certainly saw the funny side of it, Tweeting “#eth”  which drew the attention of the official Olympics account which said it was “great to see Jack and the crypto community supporting the #ETH athletes!” 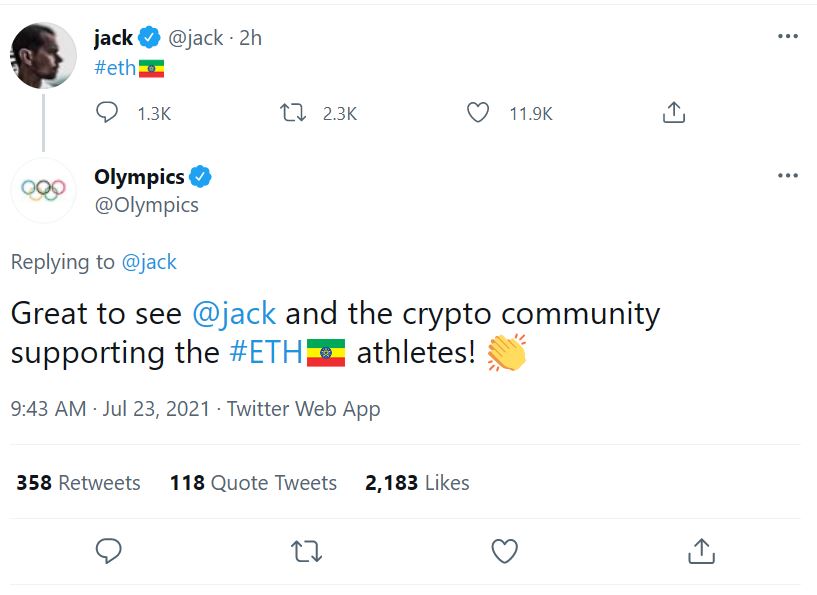 Twitter influencer Crypto Cobain also found the funny side and tweeted “HAHA” to his 403,400 followers that “this is perfect.”

NFL footballer Sean Culkin, who is converting his entire 2021 NFL salary into Bitcoin, wondered why so many people were “not realizing its a troll”

Bitcoiners such as “Bitcoin Meme Hub” jumped in the joke by posting fake Tweets from Ethereum co-founder Vitalik Buterin supposedly stating that “this is not funny Jack.”

In fact, the Ethiopian flag had nothing to do with Ethereum at all. The social media platform has been attaching flags to hashtags of nations competing in the 2021 Tokyo Olympics. The promotion is part of a ‘hashflags’ campaign that the platform also did for the 2016 Olympics in Rio De Janeiro. 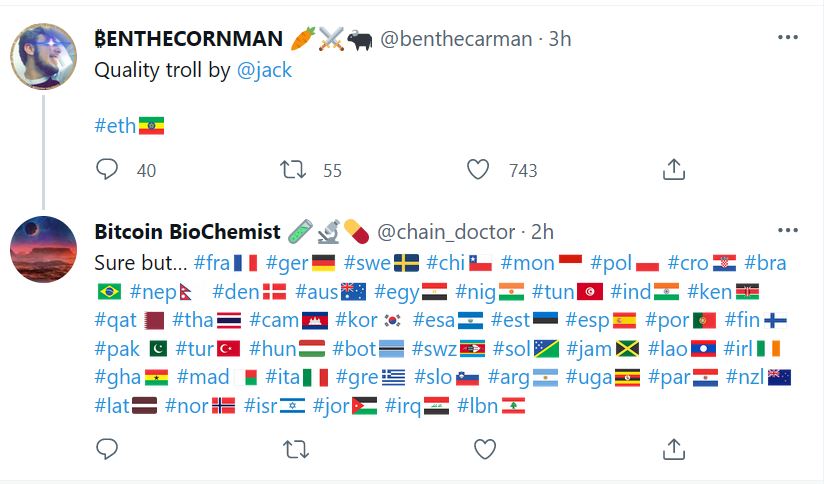 Interestingly the Twitter CEO used the Ethiopian flag to promote Bitcoin earlier this year, after he retweeted lobbying efforts from a group of Ethiopian-based entrepreneurs dubbed “Project Mano” who were urging their government to consider mining and hodling BTC.

“We have all these monopolies off balance and the individual doesn’t have power and the amount of cost and distraction that comes from our monetary system today is real and it takes away attention from the bigger problems,” he said as he emphasized Bitcoin’s potential for solving financial inequality.