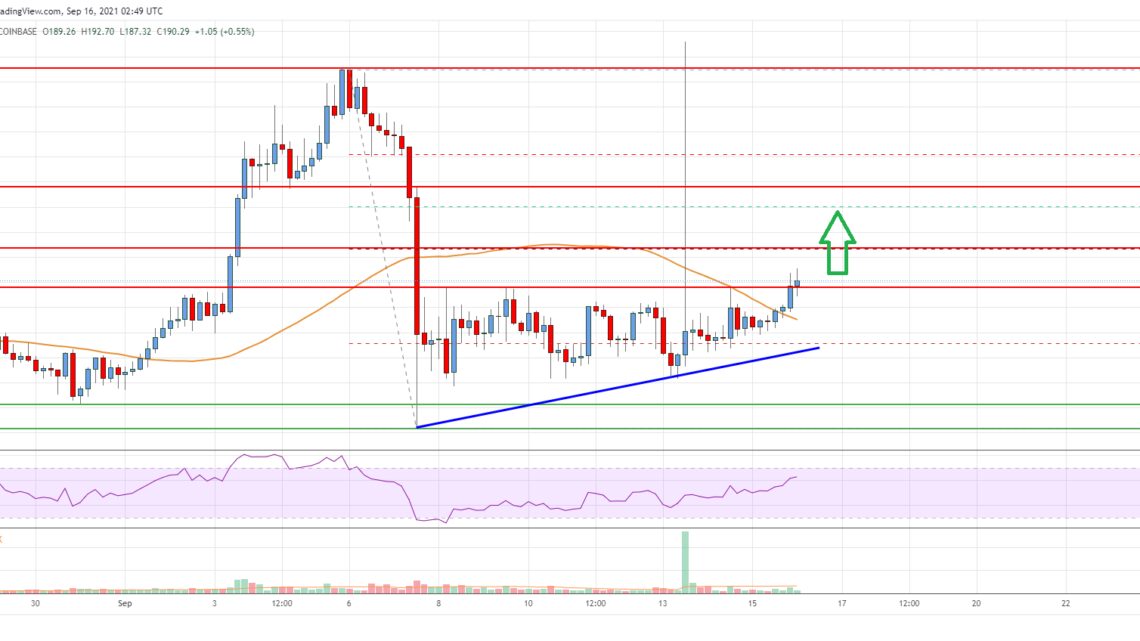 Litecoin price is showing positive signs above $180 against the US Dollar, similar to bitcoin. LTC price could continue higher if it clears $195 and $200.

This past week, there was a major decline in bitcoin, ethereum, ripple, and litecoin against the US Dollar. LTC broke many supports near $200 to enter a bearish zone.

It tested the $161 zone and recently corrected higher. It climbed the 23.6% Fib retracement level of the key decline from the $232 swing high to $160 swing low. There was also a decent increase above the $180 resistance level and the 55 simple moving average (4-hours).

An immediate resistance is near the $195 level. The next key resistance could be $196. It is close to the 50% Fib retracement level of the key decline from the $232 swing high to $160 swing low.

The main resistance could is near the $200 level. A close above the $195 and $200 levels could open the doors for a decent increase. In the stated case, the price could rise towards the $220 resistance in the near term. On the downside, an immediate support is near the $180 level and the 55 simple moving average (4-hours).

There is also a key bullish trend line forming with support near $177 on the 4-hours chart of the LTC/USD pair. If there is a downside break below the trend line and $175, the price could extend losses. The next key support is near the $165 level, below which there is a risk of a move towards the $155 level.

Looking at the chart, litecoin price is clearly trading above $180 and the 55 simple moving average (4-hours). Overall, the price must move above the $196 resistance to start a decent increase in the near term.

4 hours MACD – The MACD for LTC/USD is now gaining pace in the bullish zone.

4 hours RSI (Relative Strength Index) – The RSI for LTC/USD is now above the 50 level.

What Is Terra? The Blockchain for Stablecoins Explained