In a No-Deal Brexit, Where Do You Report Your Trades/Transactions to?

The countdown to New Year’s Eve is on and Brexit is imminent. If the United Kingdom (UK) leaves the European Union (EU) without an agreement (no-deal Brexit), it is important to ensure transaction reports are submitted to the correct Trade Repository (TR) and/or Approved Reporting Mechanism (ARM). There has been no sign of a Brexit deal yet so at this stage, we are helping you prepare for a ‘worst-case scenario’. Regardless of what happens, your NCA will expect you to manage your EMIR, MiFIR and SFTR requirements.

Where Are You Currently Reporting Your Trades/Transactions to?

European investment firms (e.g. those regulated by Cysec and FCA) currently submit their trades/transactions for EMIR, MiFIR and SFTR to an Approved Reporting Mechanism (“ARM”) and (“TR”). TRs are authorised by ESMA at an EU level. ARMs are authorised by the local NCA. However, any TR or ARM authorised by the FCA or established in the UK will no longer be part of the EU from 1 January 2021 and therefore ESMA approved.

This means that that a UK based TR or ARM will not be a compliant destination for EMIR, MIFIR and SFTR reports for investment firms that are still within the EU on 1 January 2021 in a no-deal Brexit.

Likewise, an EU based TR or ARM will not be a compliant destination for FCA regulated firms from 1 January 2021 unless transition arrangements are put in place, which will clearly not happen in a no-deal Brexit.

How Are You (and TRs and ARMs) Going to Manage a No-Deal Brexit?

To accommodate a no-deal Brexit scenario, many TRs and ARMs have established new entities and obtained registration for a second TR and ARM. Firms such as DTCC and UnaVista now have separate UK-based and EU-based ARMs and TRs to overcome this problem.

Investment firms (and their delegates) will need to report trades and transactions to the right place in a no-deal Brexit, i.e.:

What do you need to do? 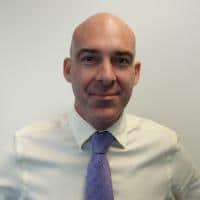 a no-deal Brexit. This may mean setting up a new contract and reporting arrangements with a new TR/ARM which may or may not be related to the one currently being used. Firms using a delegated reporting provider should check that the appropriate arrangements are being made.

A key message from the FCA is that all firms should continue to prepare for all Brexit scenarios given the state of negotiations. Consider scenarios for you and we assure you a transition that is as smooth as possible and compliance with the post-Brexit reporting requirements.

This week some negotiations are going on informally between the EU and the UK but the next key EU Council will take place in mid-October and the UK Prime Minister has said that if no agreement is reached by then, the UK is heading for a no-deal Brexit.

A Summary of How to Manage EMIR/MiFIR Reporting in a No-Deal Brexit?

The table below indicates which TR or ARM you will need to report your trades/transactions to under each regime.

What are the post-Brexit reporting requirements under MiFIR and EMIR?

In a no-deal Brexit, reporting obligations in the UK will be the same as those under MiFIR/MiFID II as they have been adopted locally by the UK parliament, however over time the UK is likely to make changes and diverge from the European requirements.

However, in the event where an EU investment firm has executed its transactions via a UK branch or vice versa, the entity will have a dual reporting obligation. The FCA made it clear that the branch will no longer be able to discharge the reporting obligations by transmitting orders to the other entities.

The flow chart below shows the reporting line in two scenarios: 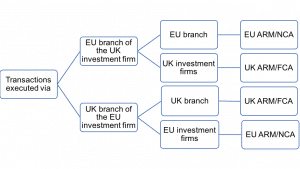 Following a no-deal Brexit, the EMIR reports will need to be split by the jurisdiction of the investment firms rather than the location of its branches. The diagram below illustrates the reporting line in various scenarios: 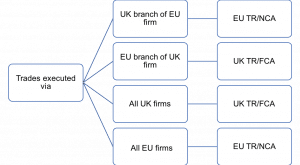 Do you need to split your transactions by jurisdiction?

Investment firms will need to split the transaction reporting files by the relevant jurisdiction of the entities or the branches and submit them with a relevant naming convention.