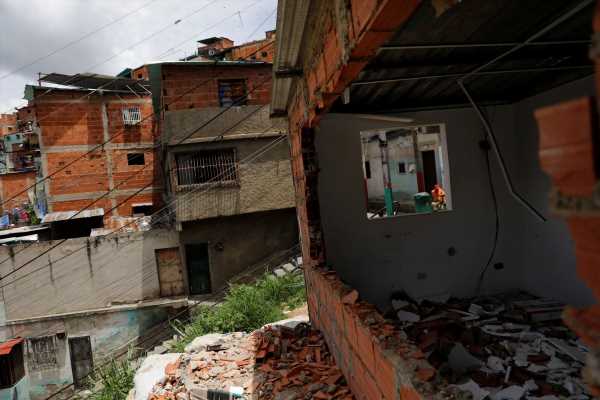 You can not ignore politics because politics is power, and how that power is used has consequences.

So says Adam Curtis, with one of those consequences on vivid display in Venezuela where a gang of 300 has been engaging in pitched gun battles with the police in Caracas, Venezuela’s capital.

“It is becoming more evident that Maduro is losing control in and out of Caracas,” said Alexander Campos, a researcher at the Central University of Venezuela. “The capacity and ambition of criminal groups from gangs to guerrillas is growing.”

These gangs are trying to take over a highway linking Caracas to the west – which would allow them to control shipments into the capital.

They have set checkpoints with the above building being one of them formerly used by El Koki as gangs there now try to take over territory.

This is some five years since hyperinflation began in Venezuela with inflation there ‘falling’ to 2719.50 percent in May.

It’s GDP is decimated, down more than 50% since 2014 as the country fails to recover or halt the decline now seven years on:

Venezuela’s troubles began after oil prices fell following Russia’s annexation of Crimea in 2014 as Saudi Arabia flooded the market with rumors suggesting it was under pressure from Obama.

Venezuela’s primary export was oil, with it used to subsidize government handouts. After oil prices fell, that stimulus turned into inflation and then hyperinflation with the government unable to get a grip on the situation.

They tried to address it by, among other things, launching an ostensibly oil backed Petro token, but that failed to take off.

The citizenry there has also failed to change the administration with attempts to do so unsuccessful as the military stood by Nicolás Maduro, Venezuela’s ruler since 2013.

Individuals thus seem to have taken matters on their own hands by forming gangs, marking a dangerous turn of events as Venezuela risks descending into lawlessness.

6 Considerations When Choosing A Trading Platform For Crypto Beginners