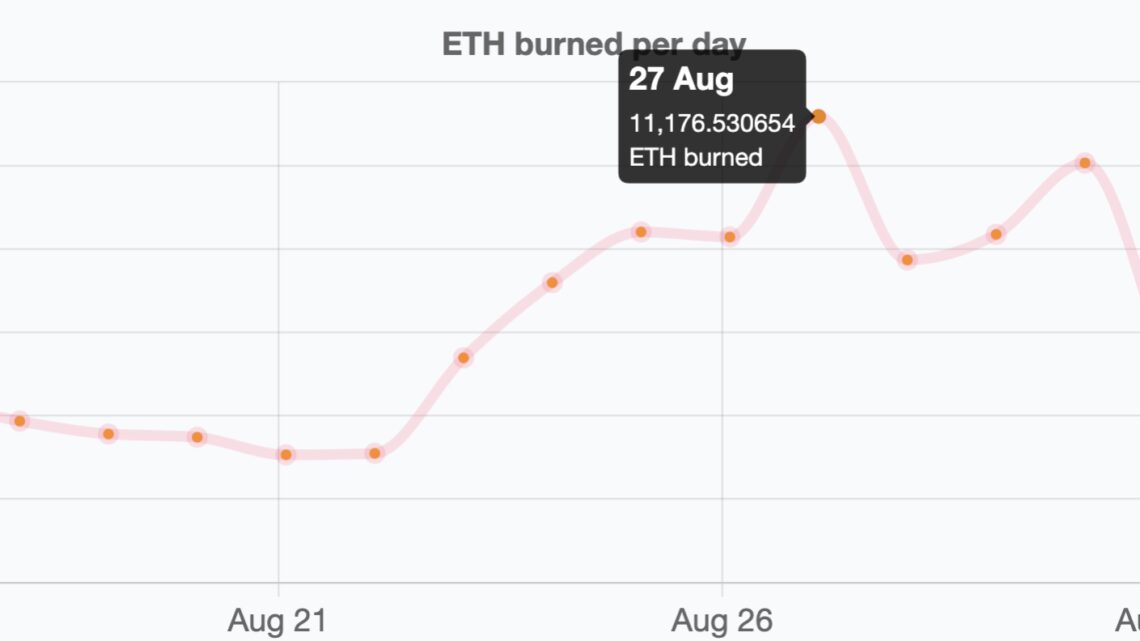 Half a Billion ETH Burns on NFTs

Close to half a billion dollars worth of ethereum has been burned in less than a month as the crypto currency reaches the milestone of removing from circulation about 0.1% of its total supply in circa 25 days.

The vast majority of burners are NFTs, but eth is so diverse that simple transfers are actually the minority of usage as seen in the rankings.

Simple eth transfers have burned almost as much as Tether and USDC combined, the dollar tokens.

Uniswap is now the only ranking defi with that alone burning a bit more than simple eth transfers.

Just the NFTs ranked here have burned about 32,000 eth, worth $100 million, with this clearly being currently the biggest driver of demand for ethereum network usage.

Some young men nowadays even propose with an NFT rather than an actual ring. Whether that gets them a slap or a baby, we don’t quite know, but their thinking is presumably why waste money on a diamond ring when the value of that diamond is primarily because people use it in rings as a symbol status.

A symbol that actually gets you something as it tells other men she is taken, avoiding potential misunderstanding or outright conflict. To achieve the same, she’d have to wear an NFT shirt forever. But, you can’t see the diamond ring on the internet, so how do we achieve the same result digitally?

This on the surface silly gesture of giving an NFT ring therefore may be interpreted as a powerful statement of first achieving the same result digitally as physically in telling online men she is taken, and in second achieving equivalence between a diamond and an NFT as in this case both derive their value from telling other men to go look for some other woman.

That we can have such interpretation is to our annoyance because we feel it is just a silly jpeg, yet what our children will feel is to be seen.

This conflict between emotions and reason at the pioneering edges is at least easier for us millennials than what must be a grandpa, Mr Banksy.

His world is kind of crashing down as his privilege of making statements that are sold for millions just because they are his statements is now in some ways being democratized to everyone and anyone through jpeg tokens.

Some kid that never had an interest in cryptos despite being familiar with them now squabbles some baby ‘painting’ and calls it some flying cat NFT with the pride of achievement.

And if we had to compare that pretty positive, colorful, though silly image, with Banksy’s dark vision, we’d of course say the youth is clearly very much winning.

It is said that creativity or genius peaks in the 30s and early 40s or for some in old age, in the 70s. Thus you’d expect Banksy to keep to the old creativity of graffitiing online, like on 4chan boards or imguring links in the comment section of pages like this.

No wonder thus his message is a very normie boomer dark vision of a crypto punk smoking a cigarette in front of a coal power station.

You’d vape these days, of course, and you’d want to inspire the young to solar farms or hydro power stations, but age does its thing as time nears to leave. What was beautiful becomes ugly as no longer it can be enjoyed. To make that departure easier, the future becomes bleak not promising. Hence his only critique of our times was monkeys in parliament. Giving the problem, but without a solution, the signature mark of arrogant boomers.

Their focus on negativity and only on problems, never on solutions, is one reason why art now stands to be disrupted with utterly pleasing things that at least make you like life:

The democratization of art where at least for now it is a completely level playing field with Banksy standing side by side with some kid, is a first perhaps in history to this extent where everyone is an artist and everyone is an art patron.

This revitalization, where someone like Banksy is subject to millennials’ criticism and some flying cats get the kid glove treatment, can have wider effects in our perception of problems and solutions as well as in our societal collaboration.

For the message is no longer controlled by the ivory towers that for five decades have lifted just one Banksy. The message is instead finally free… well, however much eth it costs obviously.

And the rulers are no longer the art patrons, the art patrons are now the pioneers and for a very good reason that brings all this lyrics to the ground.

The above silly and childish flying cats painting – we want flying cars not cats – can easily be overlooked for what it could say to someone that wants to give it a meaning.

That can be a seed phase. Obviously we just made it up, but that flying cats image can be one way to store your crypto wealth and if you’re going to look at it, you might as well look at a nice image, hence art.

You can also put a private key in there, hiding in plain sight as on the surface it looks like just an amateurish attempt to NFT.

This of course isn’t quite new as painting for long have been used to hide safes. We’re just digitalizing the option for the same usage of art, but online.

The artists don’t care as they get paid and get to do art. So extending in the process support for crypto to liberals and the liberal art establishment which has always been a bit on the sideline looking with interest, but now is kind of cheering this space at least where NFTs are concerned.

Yet they all say they’re probably in a bubble that will probably crash as now even copy pasta blockchains have their own NFT copy pastas that suggests NFTs are maybe a bit overvalued.

In that case, eth would benefit either way as it is benefiting from the rise in demand for NFTs and then should benefit from some of that value in NFTs going to eth.

Where NFTs themselves are concerned, the only question is whether they will have a floor. If they do, then NFTs as a thing have not yet quite began because from gaming to ticket, to the many potential experiments with the form and substance of NFTs themselves, exploration is just about being considered.