The behavior of crypto market participants often depends on political and economic factors: the price of crypto assets, regulations in a specific country, or political events. For Chinese miners, however, the factors differ somewhat. For several years, Chinese mining operations have been largely reliant on climate. While Western crypto companies fear falling stock prices and regulators, the survival of many crypto mining operations in China depends on rain.

Chinese miners have recently migrated from the southern regions to the north, where electricity prices can be as low as $0.01. This migration has led to a surge in the Bitcoin (BTC) hash rate by more than 40% in two days. While the migration occurs annually, the wet season closing out may not be the only contributing factor this year.

The migration of Chinese crypto miners is a common practice that is mainly affected by the climate determining electricity costs. Eddie Jiang, chief operating officer and partner of mining pool ViaBTC Group, explained to Cointelegraph that from April to October, China’s southern provinces see abundant rainfall, creating a surplus of hydropower and subsequent cheap electricity prices.

According to Dejun Kenny Ge, founder of Zhongda Jinfu Finance and co-founder of Shanghai-based investment platform Dd.finance, when moving from China’s north to its southwestern regions, miners can save about $0.18 per kilowatt (12 yuan per kilowatt). When the wet season in southern regions ends in late October, the price of electricity rises to about $0.054/kWh. At this time, miners shift their rigs to facilities in northwestern regions such as Xinjiang, Inner Mongolia and Qinghai, where electricity typically costs about $0.05/kWh.

Low temperatures in the northern regions are another factor contributing to the relocation of Chinese miners from the south. Calling this process the “great miner migration,” Alejandro De La Torre, vice president of crypto mining pool Poolin, explained: “It is cold in Northern China, so mining farms don’t need to spend on cooling for the mining rigs.” 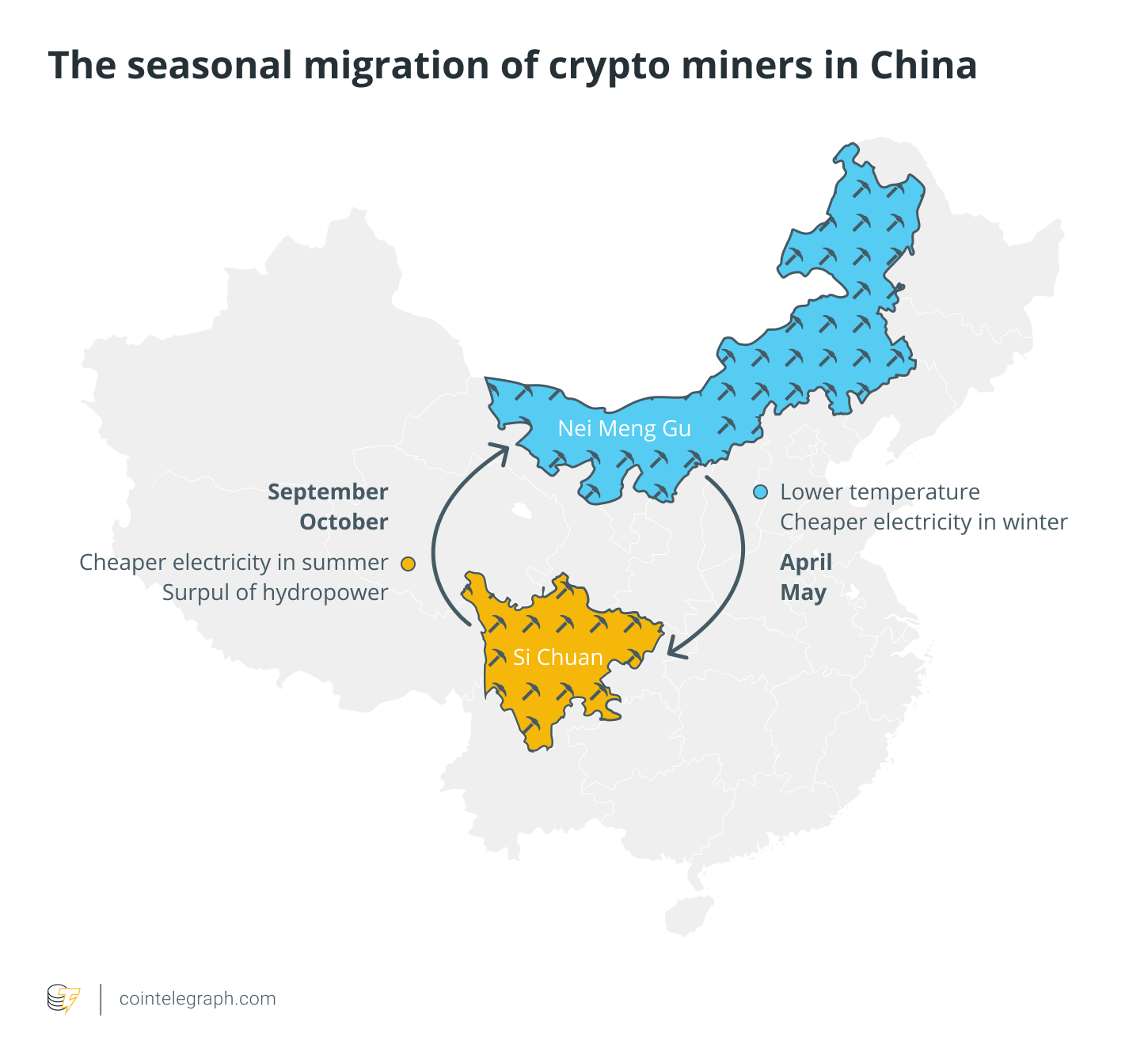 However, not all miners adhere to this principle. Wishing to remain anonymous, a local crypto miner spoke to Cointelegraph on the matter, saying that while China has two mining hubs — one in Sichuan province (southwest China) and one Inner Mongolia (North), Chinese miners rely more on southern capabilities. He also noted that many Sichuan miners are now sticking to their locations rather than relocating to the North: “Our mining capacity in Inner Mongolia currently generates only about 20%–30% of our overall hash rate.”

It’s not just the climate this time?

Taras Kulyk, senior vice president of blockchain business development at Core Scientific, a digital asset mining infrastructure provider in North America, revealed that Chinese miners have come to realize that the mass migration of units every season is not the most sustainable model.

Some sources claim that Chinese miners are migrating this year not only because of climatic changes, but because of tightening regulation in the country and pressure on crypto organizations by the government. Earlier, it was reported that the co-founder of the OKEx exchange was arrested by the Chinese police. Zhongda Jinfu Finance’s Ge noted that in China, mining facility operators have been the hardest hit by recent, tighter regulations:

Since 2017, the Chinese government has increased the number of inspections conducted at crypto farms, many of which have since closed. As Jiang noted, local governments check the compliance of mining electricity consumption every year. “For mining farms that use non-compliant electricity, the regulatory authorities will require rectification until they meet the requirements.” He then went on to add: “This year, some local governments have set up compliant consumptive electricity, and mining farms can apply to use it for mining. I think this has made greater progress in policy supervision.”

Still, few local miners relate the mining operation closures to stricter regulation. In fact, according to some, changes in the mining market in China are, to a greater extent, associated with the insufficient production capacity of mining machine manufacturers and the institutionalization of the industry, with funds, listed companies and private equity firms starting to replace retail miners. According to Jiang, the increased number of institutional miners significantly affects the operation and maintenance requirements as well as investment decisions of original miners.

Is the number of miners decreasing?

According to Ge, the mining market is entering an era of large-scale operation, increased specialization and financialization, so it has become challenging for smaller mining facilities to attract miners, as he told Cointelegraph: “Back in 2019, China accounted for more than 70% of the world’s crypto mining market.” However, he also added that following the bear market in 2019 and a sharp price decline in 1Q 2020, many miners with high-consumption rigs have exited the market. Overall, “the sentiment in the Chinese crypto mining market remains neutral,” he said.

So far, local companies do not see a significant reduction in the number of large farms. Some even talk about an increase in production. De La Torre agreed that the number of farms in China and globally have increased, adding: “The mining industry in China is not facing any big challenges at all, as we can see by the global hashrate increase in the last couple of years and especially in the last year.”

Meanwhile, according to Jiang, the mining sector’s expansion may once again be attributed to the entrance of institutions, which have set up larger mining farms.

Relocation to other countries

While local miners claim that “everything is as usual,” some experts suggest that China may soon lose its mining dominance. Among the reasons, Ge highlighted the growing share of international mining operations as well as overseas institutions such as Grayscale Bitcoin Trust increasing their Bitcoin and Ether (ETH) long positions: “In the near future, there could be an increasingly fragmented and distributed market globally.”

In search of alternative conditions for placing their mining capacities, Chinese miners are now considering even drastic measures such as moving operations to other countries such as Kazakhstan or Russia. Speaking with Cointelegraph, a crypto miner from Changzhi noted that Russia is one of the most attractive countries for Chinese miners:

“I always wondered how come China is mining about 65% of all BTC currently and not Russia. I’m really interested in trying business in Russia. We are planning to come after the pandemic to watch the prospects of mining in Russia. In fact, many Chinese companies do.”

Other miners seem to be choosing North America, which, due to its stable energy infrastructure, financial resources and evolving regulatory clarity, is now becoming a viable option. Kulyk believes that Chinese miners are seriously researching the prospect of diversifying operations by moving them to North America. He added that Core Scientific is currently working with several Chinese players to move a portion of its hardware to North America, further explaining:

“One of the biggest aspects of North America as an ideal mining environment is that its power remains stable, without changing material within the different seasons. Most importantly, regulatory policy in North America is clear and favorable towards digital assets.”

“Chinese miners aren’t happy to move to the U.S. for cheaper power because of the political instability. Close contacts are able to get cheaper power prices in the U.S. but are not comfortable setting up Chinese-owned businesses in the States with all the regulatory actions against China recently.”

So it seems, one can hardly speak of large-scale migrations in the short term. However, local miners do not intend to leave the market en masse, and it seems that they have already provided for several working scenarios to continue their business. In response to the closure of coal plants, Chinese miners have started connecting to hydroelectric power plants, moving to colder regions at the end of the rainy season, and coping with rises in electricity costs by using cheaper equipment.