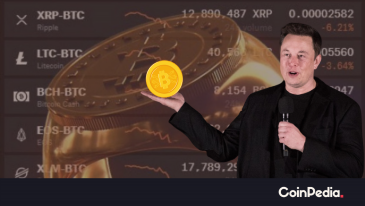 Elon Musk's Encoded Tweet on Bitcoin !! Will This Fuel BTC Rally to $50K

Bitcoin, The King of all Coins

The Bitcoin price that received a big Tesla push, coiled up again to form new ATH above $48K within no time in the past working day. However, a bearish divergence was on the way to pull back the price below the strong support levels at $45K.

In a very recent update, Elon Musk believes that Bitcoin is the one coin that rules all other altcoins in the crypto space. He also mentioned sarcastically that dogecoin also requires Bitcoin support to go to new highs.

Musk, who was a strong dogecoin proponent, first displays Tesla’s Bitcoin holdings and later purchases DOGE and now indicates that both form a good combination for huge profits. Some analysts like Rekt Capital, however, believes that the current drop is not a bear market but a healthy pullback.

The BTC price was trending in a very narrow trend and attempting very hard to maintian above the $45K levels since the early trading hours. The mention from the world’s richest man pumped the price that gained nearly $800 in less than an hour. The BTC price is expected to hit new highs as according to ananlysts PlanB, Bitcoin is back on track to achieve $100K anytime between April and September. On the other hand, as per on-chain data analytics platform, Skew, the maximum chance Bitcoin price rally exceeding $100K is in December 2021, which is just 12%.

Therefore, the upcoming Bitcoin bull rally would be more interesting to witness as Bitcoin price if sustains from the current levels can jump straight to $52K levels else drop to $40K is imminent.

Bitcoin jumps by $2,000 after Elon Musk posts an image of a crypto-themed ring and makes a vague reference to dogecoin | Currency News | Financial and Business News
Technology