A blockchain game producer has chosen Tron over Ethereum to base its native token Plat, saying goodbye to ERC-20.

On May 10, Bitguild announced the news on its official Twitter page, saying that the token swap is now live, encouraging users to go the company’s page with detailed instructions for the PLAT migration. PLAT was initially created to be used only within the Bitguild ecosystem.

Game devs give up Ethereum for Tron 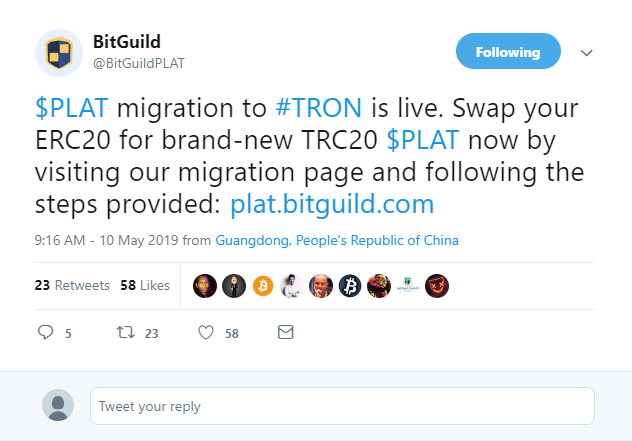 Bitguild moved its dapp game Bitizens to Tronback in 2018. Now it turns out that the achievements of Tron in the blockchainarea throughout 2018 and especially Justin Sun’s call to dapp makers to startdeveloping on Tron achieved its goal.

Many popular games moved to the Tron blockchain in 2018 and they still keep coming over. Among the ones that now run on it are the popular Chinese blockchain MMORPG KuaiXiYou and TronGoo (formerly known as EtherGoo).

Many developers began to create their games on Tron last year and the main reason is that Justin Sun had set up a special fund for dapp makers to support them during the ‘crypto winter’.

Apart from game developers, recently even Tether decided to move its USDT stablecoin to Tron. Currently, the tokens are being swapped into new Tron-USDT stablecoins. At press time, over 3.5 percent of all USDT is on the Tron blockchain.

The PLAT token is being utilized inside the game and also gets burned, which decreases the token supply and makes its value go up.

The migration process should be easy to conduct, since ERC20 tokens created on Ethereum are totally compatible with Tron’s TRC20 token standard. Justin Sun has initially set the goal of outperforming Ethereum in every aspect, including token migration, it seems.

Tron’s expansion into the gaming industry

In February, Tron teamed up with 0xGames in order to launch its 0xWarriors gaming dapp on Tron. Besides, Justin Sun’s company signed a Memo of Understanding with Korea Mobile Game Association (KMGA) and Korea Blockchain Contents Association (KBCCA) – the leaders of the South Korean industry of games.