Daedalus Wallet Review: Is It Safe or Not?

Daedalus is a web-based cryptocurrency wallet that supports only the Cardano ADA cryptocurrency. The wallet allows the user to store data such as private keys and many more.

The publishers of Daedalus, the Cardano Foundation, is headquartered in Switzerland and has been operating since September 2015.

Daedalus wallet has a number of security alert functions which enhances its safety. Since the Daedalus wallet is an HD wallet, the keys are derived in a deterministic way from a general seed. This makes the encryption level much higher as this method enables the creation of a specific and initial key. It consists of three additional structures that are usually stored in root areas.

Users are completely responsible for the security of the wallet, so if the account is hacked or used by a person without having the real users’ permission, thus the user is held accountable.

It is the user’s responsibility to keep their password and keys are stored safely.

The transaction fee with Daedalus is based on a certain formula. The rate uses a special constant ADA figure, currently 0.155381, which is added to 0.000043946 ADA/byte and then multiplied by the size of the transaction in bytes. The calculation has the 0.1641702 ADA result which the total transaction fee required.

Users are able to export a paper certificate, which ensures maximum security.

Assurance monitoring for configurable transactions guarantees the wallet’s safety in case the transaction processes are irreversible.

The Cardano Blockchain was created using the Haskell programming language, making it very secure. As a result, this also makes the wallet secure and reliable when it comes to the transaction.

Cardano’s wallet technology also uses a highly innovative peer-reviewed research, which involves the formal verification codes as well as an easy extensibility due to an encrusted structural design.

There are numerous online platforms that can be a source of information for the wallet, such as the Cardano hub and the Daedalus wallet website where there are available information and resources regarding Daedalus cryptocurrency wallet.

How to use Daedalus?

After the Daedalus wallet is installed, the application automatically opens and the user can start using the Cardano ecosystem. The user is able to send and receive ADA cryptocurrency as wished.

Also, they can access the history of the entire transaction made in the process as well as the previous processes. 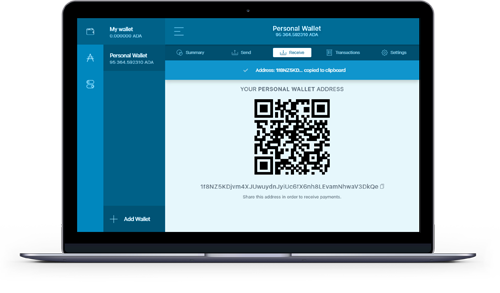 How to store ADA coins on the Daedalus wallet

The wallet installer has versions for both the Windows and macOS systems. After installation, run the installer and install the wallet in the location of choice.

When running the installed program, a synchronization window will appear, followed by the main dashboard. To create a new personal wallet, click on the ‘+’ sign.

Then, name the wallet and enter your password (two times for verification purposes). After completing this step, you will be asked to provide a recovery phrase.

3. Transferring your ADA coins to the wallet

After creating your wallet, click on the receive button inside of it. The wallet address will appear to you as a QR code which and as a string of letters. To send Cardano ADA to your wallet you can scan the QR code, or copy this address.

The Daedalus wallet is the recommended wallet for ADA users, having strong security and being completely synced to the Cardano blockchain.

What is Kyber Network?