After Bitcoin Enormous Growth, a Pullback Is Expected Soon

Bitcoin (BTC) is back with explosive growth since the beginning of April and experienced a local high above $8,000 this week, presenting gains of 125% for the year.

The recent rise in price has been parabolic, slashing through major resistance levels like butter and climbing at an unprecedented rate. However, as the old saying goes, “what goes up, must come down,” which is exactly what leading analysts are predicting to happen soon. 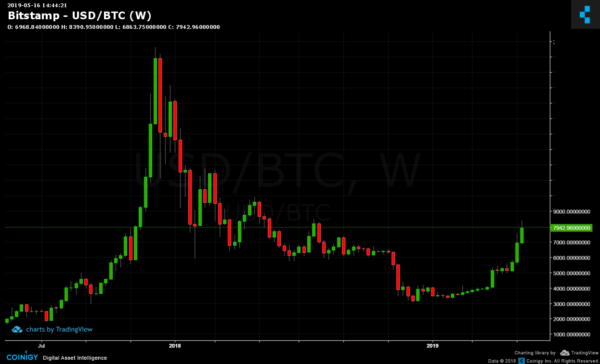 Is a Bitcoin Pullback Coming?

According to veteran investor and trader Anthony Grisanti of GRZ Energy, Bitcoin is due for a pullback, and he believes it will happen soon. Grisanti shared his views on Bitcoin during a “Futures Now” segment on CNBC on May 15.

Per the segment, Grisanti said:

Regarding this gap, he believes if investors start taking profits, the price could easily fall very quickly, something that would actually be very healthy for the market going forward.

During the same CNBC segment, Path Trading Partners chief market strategist Bob Iaccino said he thinks he knows why the Bitcoin market has surged with such power in its latest run. In Iaccino’s opinion, it was caused by the excitement over Bitcoin’s lightning network.

According to Iaccino, the lightning network is the catalyst behind Bitcoin’s latest price run, as it’s poised to make Bitcoin much more friendly to businesses and consumers, changing the crypto ecosystem as a whole. He praised the scaling software for its ability to make small transactions easy for consumers.

“Where you look at Visa, who can transact 65,000 transactions per second, Bitcoin’s [prior level] was about seven, and now with the implementation of the Lightning Network, which is a software add-on, you can actually get these smaller transactions off the blockchain network, making adaptability of bitcoin as a currency a lot easier.”

Cisco is ‘defying the macro’ as stock heads for best day since 2016, analyst says
Technology