Africa – The Land of Future Opportunities?

In the shadow of Europe and Australia, slowly but gradually Africa is expanding its position in the FX/CFD map of the world. While still poor and not regulated enough, it attracts more and more brokers and serves the growing number of new retail traders. Is Africa a land of growing opportunities for the industry?

In the western world, Africa has an unfair image for a very underdeveloped region of the world, where most of the people live in villages, conducting simple activities to feed their families. This very unfair picture comes from old literature, movies and Safari trips. In reality, Africa is the fastest growing continent. In 2019, the International Monetary Fund (IMF) revealed that while Africa was the world’s poorest continent it was also home to the five fastest growing economies that year.

While Africa is still poor, it has large overall potential. One of Africa’s biggest assets is a large population of success hungry people. For example, Nigeria is one of the only seven countries in the world with a population of over 200 million people. It can soon overtake both Brazil and Pakistan in population rank, being the 5th most populous country in the world. Both Ethiopia and Egypt have populations of over 100 million, and they are ranked in the top 10 of the world.

It should not surprise you that Nigeria has become such an attractive place for the FX/CFD industry. If only a small percentage (1%) of the 200 million people can be converted into FX traders, that would equal to a market of 2 million. Just for comparison, in the United States there is 200,000 active FX traders and there is around 100,000 CFD traders in the wealthy country of Germany. 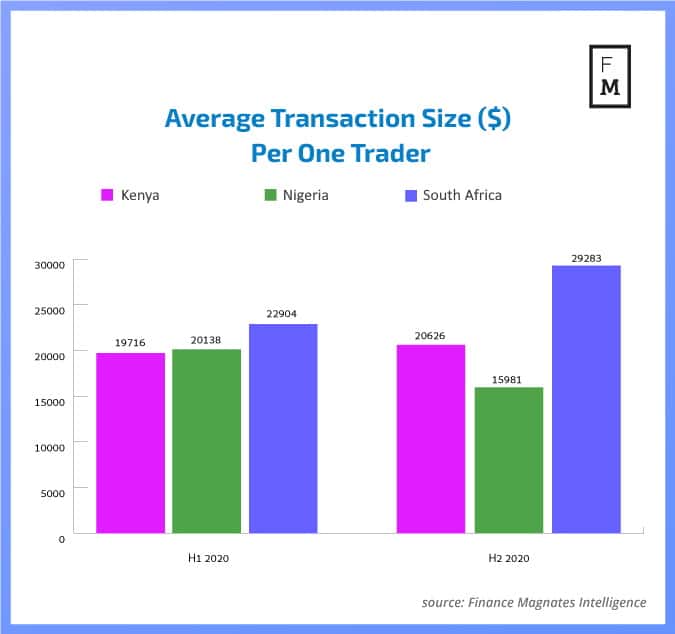 In our opinion at the moment, there are three most interesting countries in Africa from the perspective of the FX/CFD market: Kenya, Nigeria and South Africa. One of the most promising is Nigeria. We have already mentioned its large population, which is an asset. According to IMF the expected GDP per capita in 2021 will be 2,432. That is half the value for South Africa and a little more than Kenya.

To get the full article and the bigger picture on the future of FX/CFD industry in Africa, get our latest Quarterly Intelligence Report.
Per Quarter€5101 issue per Year-Digital Version delivered to your email

Annual€1,7804 issues per Year-Digital Version delivered to your email