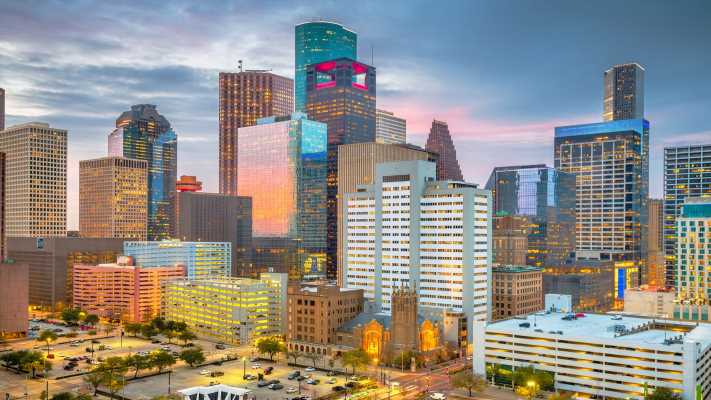 Workers are slowly returning to offices: Dallas takes the lead, while San Francisco and NY trail behind

A growing number of states are lifting business constraints as more Americans are vaccinated against COVID-19, leading people to shop, dine out and travel.

But the revival of one activity has been agonizingly slow: Working from the office.

The number of employee office visits in 10 large cities reached 26.1% of the pre-pandemic level the week ending April 21, according to Kastle Systems, the largest provider of technology that tracks such data through swipes of keycards and other devices. While Dallas and other Texas metro areas have solidly topped that average, cities such as San Francisco and New York have lagged.

The 10-city average is up from 22.9% in mid-January but has bounced around in the low- to mid-20s since last June, rising as much of the economy reopened last summer and dipping during events such as the winter storm that battered much of the country, particularly Texas, in mid-February.

Is the office back?: COVID-19 created a work-from-home culture but companies are trying to make the office appealing again

Does it work?: Biden is turbocharging the economy with stimulus. Will he smother it with regulation?

“While the return to office is picking up slowly, we have not seen meaningful movement yet,” says Kastle Chairman Mark Ein. “It’s a very low number.”

Higher office occupancy is critical for the survival of downtown restaurants, shops and other businesses that rely heavily on purchases by office workers. Many outlets have permanently closed during the health crisis as central business districts turned into ghost towns. Office building owners are also hoping for a comeback to minimize bankruptcies in that industry.

The outlook should brighten in coming weeks, Ein says, as a growing portion of the working age population gets their COVID-19 shots. President Joe Biden told states to make every adult eligible for a vaccine by April 19. By early June, most workers should be vaccinated and many could be back at their offices by July, at least some of the time, Ein says.

So far, 68.4% of people 65 and over – who typically are retired and not working in offices – have been fully vaccinated, compared with 30% of the total population, according to the Centers for Disease Control and Prevention.

“We think you’re going to see many more people coming to the office in the summer,” Ein says.

“While the return to office is picking up slowly, we have not seen meaningful movement yet … It’s a very low number.”

Another hurdle for America’s return to the office is that many companies and their workers have said they’re satisfied with remote work, believing it has improved productivity.

Paul Leonard, managing consultant at CoStar, a commercial real estate research firm, thinks office visits may remain depressed over the summer but should reach at least 50% after Labor Day and 80% by the end of the year. A Gartner survey of HR leaders at 130 companies in December found 90% plan to let employees work remotely at least some of the time even after much of the population is vaccinated.

Leonard reckons 10% of the workforce will work from home all the time, a third of the remainder will return to the office five days a week and two-thirds will let workers split time between the home and office. Based on those assumptions, 34% of the workforce would be remote on any given day.

Since Kastle’s systems track office visits rather than individual workers, a company that lets employees work at home two days a week would record visits that are 60% of their pre-pandemic level.

Houston is among cities returning to offices more rapidly than others. (Photo: Sean Pavone, Getty Images/iStockphoto)

Texas metro areas have well exceeded the 10-city average of 26.1%, with Dallas, Houston and Austin at 41.2%, 39.3% and 38.8%, respectively. The cities rely mostly on cars, rather than mass transit, where COVID-19 is easily spread, to get people to work, Ein and Leonard say.

Also, they say, the state lifted restrictions on shops and restaurants earlier and more aggressively than other states, an approach that combined with Texas’s more libertarian culture may have affected the views of professional service firms. Many office districts in Texas are also located in less dense suburban areas that are deemed less contagion-prone than urban cores.

“In Texas, there’s a little more risk and less concern about the virus,” says Stephen LaMure, CEO of Dominus Commercial, a Dallas commercial real estate firm, adding that most tenants in the buildings it handles have returned to the office.

Lisa Hall, CEO of Bene-Marc, a Fort Worth-based insurance firm for sporting events, says she asked her eight employees to come back to the office April 18 after they told her they were comfortable doing so.

A big factor, she says, was “the availability of vaccinations and the ability of anyone that wants to get one” to be inoculated. Also, Hall notes, Texas Gov. Greg Abbott lifted the state’s mask mandate and all capacity limits early last month and COVID-19 cases have been falling.

She says she wanted employees to come back to the office so she could assess their work load and productivity to determine if she needs to hire more workers now that revenue is gradually rising after plunging 80% early in the pandemic.

In Houston, when Masroor Fatany, opened a The Halal Guys franchise in a downtown office district in late January, one or two tables were typically occupied for lunch in the 40-seat eatery. But he has seen a gradual increase in the area’s office workers. Most tables are now filled and sometimes there are lines to order the restaurant’s gyros, falafels and other dishes, he says.

Red tape and the economy: Biden is turbocharging the economy with stimulus. Will he smother it with regulation?

Although the rebound still has a long way to go, “We have turned the corner,” Fatany says.

At the other end of the spectrum, San Francisco and San Jose are at 14.2% and 17.4% of pre-crisis office visits, in part because they’re high-tech hubs where companies and their workers were used to telecommuting even before the health crisis, Ein says.

Other industries are more inclined to return to the office swiftly. Office occupancy among law firms in the 10 cities it tracks is at 39.3%, Kastle data shows. The companies tend to be less tech savvy, they’re more reliant on paper documents, and they have more rigid policies, Ein says.

Law firms also deal with sensitive information that they may feel is less secure on home-based computers, Leonard says. That makes the Washington, D.C., area, where office visits are at 22.4% of their pre-pandemic level, something of a hybrid, he says. There are lots of tech-savvy office workers who can telecommute but the region’s many law firms and defense contractors are concerned about security risks.

New York City also lags, at 15.8% of pre-pandemic office visits, in part because it was hit hard by COVID-19 early in the pandemic and has been cautious about reopening, Ein says. The city is also particularly dense with both people and offices.

Democrats seek narrow path to rein in cost of medicines