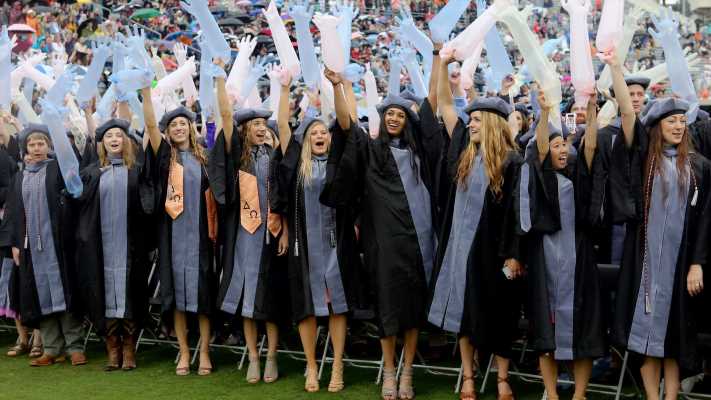 A new report from the Gates Foundation and the Institute for Higher Education Policy highlights questions about the value of a college education and wide-ranging disparities in terms of race and income. (Photo: skynesher / Getty Images)

When students agree to sit out of the workforce for four or more years while paying tens of thousands of dollars on a college education, they should know their time and money will be worth the effort.

But a massive review of federal earnings data reveals what some graduates already suspected: A college degree doesn’t always pay, or certainly not as much as they might hope.

What’s more, where students go to school may be a better predictor of future earnings than if they graduate.

Those are among the takeaways from a report released Wednesday by the Gates Foundation and the Institute for Higher Education Policy that sought to answer the question: What is a college degree worth?

The report, two years in the making, comes at a time when college has never been more expensive and the nation’s $1.7 trillion student loan debt continues to swell. Wednesday’s report is meant to highlight how colleges might better serve students and families. To that end, they plan to release a guide this summer that could help those trying to pick a college.

“Post-secondary education is critical to achieving any economic mobility in the country,” said Jennifer Engle, a director at the Gates Foundation with a background in higher education policy. “But the increasingly high costs for students, and, unfortunately, still too low completion rates, are putting the shortest route out of poverty out of reach for way too many students.”

The federal government has tried to make it easier to evaluate the worth of an education via the “College Scorecard,” a massive database that includes thousands of colleges and tracks, among other things, student retention and graduation rates. Under former Education Secretary Betsy DeVos, the scorecard added information about what a student might earn based on what they study at different colleges.

Researchers have long tried to define the value of an education. A notable 2017 study helped put more focus on how much colleges help students climb the socioeconomic ladder.

And U.S. News and World Report has produced a guide to higher education known as the “Best College Rankings.” That system is based in part on a university’s graduation rate or the ratio of professors to students. Critics of the ranking system have said it disproportionately favors wealthier universities, and the publication has tweaked its formula to represent how colleges serve some poor students.

The new report comes from the Postsecondary Value Commission, which is managed by the Institute for Higher Education Policy and funded by the Gates Foundation. Its model attempts to answer both the individual and societal value of an education by combining federal data from the College Scorecard with demographic information from participating universities.

Their framework factors in not only tuition but also housing costs, student loans and similar living expenses. As a minimum benchmark, they say graduates should earn at least as much as high school graduates and enough to recoup what they paid for their education, including the interest on any loans.

The commission analyzed roughly 2,900 institutions and found the majority of graduates from public and private nonprofit colleges can clear the minimum benchmark after 10 years. They also found on men who attended a four-year college earn on average $14,000 more than women. (The commission excluded some universities from the analysis because they didn’t have enough publicly available information.)

The commission’s data tool will be released this summer, and researchers hope students and families will use it to help evaluate their earning potential at specific schools. They also hope to work with more universities to better show students what they might earn long-term by using demographic data.

Of roughly 2,900 institutions evaluated in a new report on the value of a college education, about 650 failed to meet a minimum benchmark of showing that graduates earn at least as much as high school graduates plus enough to recoup the cost of their college education, including the interest on any loans. (Photo: Courtesy of University of California, Irvine School of Law via Facebook)

Places like the think tank Third Way or Georgetown University have created similar tools to evaluate the worth of a college education, according to Michael Itzkowitz, a senior fellow at Third Way and the former director of the scorecard from 2015 to 2016. He said the commission’s work is notable for highlighting the pay disparities by race.

Data from the University of Texas system offers a prime example of the disparities the commission is trying to highlight.

The commission hasn’t yet released its school-by-school breakdown, and the team’s researchers stress their data isn’t intended to rank colleges – but it does produce winners and losers regardless. Roughly 650 institutions failed to meet even the minimum benchmark of producing sufficient earnings to pay back the cost of going to college.

Itzkowitz questioned if funding these colleges helps “to provide socioeconomic mobility and equality, or does it actually serve as a driver of the racial and economic barriers that already exist?”

Engle said more research is needed to understand exactly why for-profits are falling short, but the research showed that prices are higher and students are less likely to graduate from for-profit colleges.

“It does raise concerns when we look at the majority of students who attend for-profits are low-income students and/or students of color,” Engle said. “It should raise a lot of red flags for students if they see that an institution isn’t meeting that benchmark, but that applies to public, private, or for-profit institutions.”