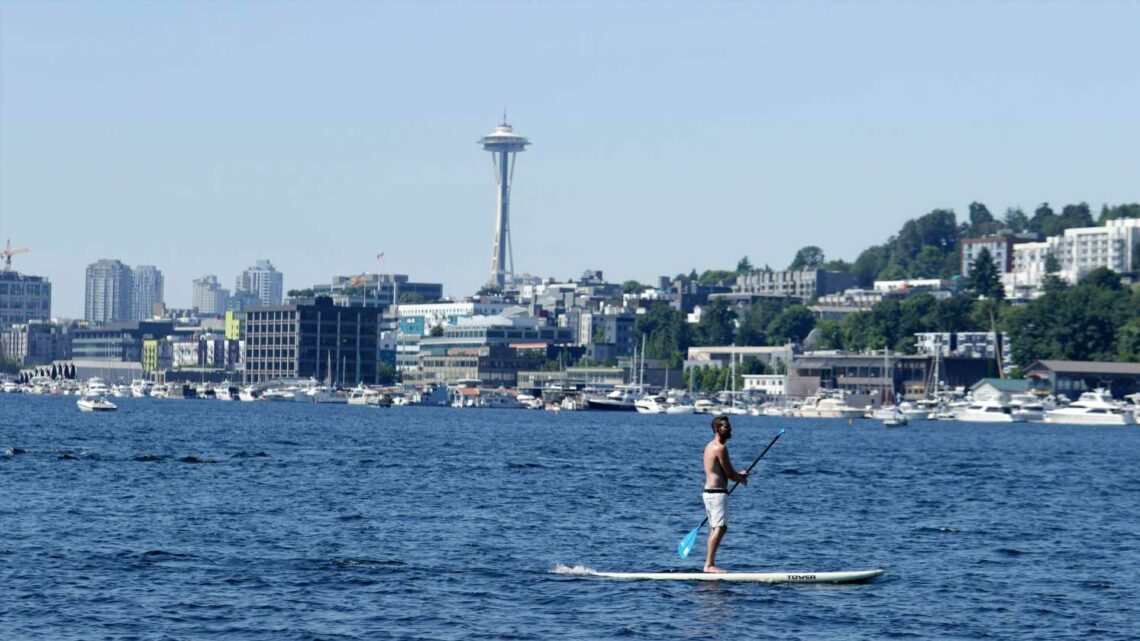 ‘We’re going to have to get used to this’: Pacific Northwest scorched in dangerous, record-breaking heatwave

Records set and broken in one city. A more-than-century old record broken in another.

The entirety of the Northwest is baking under triple-digit heat this weekend, and Sunday was no relief from the heat for most of the region. Records in many cities were broken both Saturday and Sunday and were set to be broken again on Monday.

On Saturday, Portland had the hottest day ever recorded in the city, reaching 108 degrees Fahrenheit Saturday afternoon, according to the National Weather Service, just over the previous record for Oregon’s largest city of 107, a mark hit in 1965 and 1981.

Just south of the Oregon city,Salem shattered its all-time heat record Sunday, reaching a sweltering 112 degrees. The previous record of 108 degrees was set in 1981, 1941 and 1927, according to David Bishop, a meteorologist with the National Weather Service in Portland.

And Seattle hit 102 degrees Saturday, the hottest June day and second hottest day on record since 1945, according to the weather service. And Sunday, the city also hit 101 degrees, the two hottest consecutive days since records were started in 1894.

Other cities in Washington state had already broken records by the early morning, with Bellingham blowing past a record set in 2011 and Hoquiam already reaching 100.

Portland Sunday was forecast to be even hotter than the day before — the NWS forecasts a high of 112 degrees.

Heat wave in the Western US:What’s behind the ‘dangerous’ triple-digit temperatures?

But the worst is yet to come: Monday “will be the hottest day for the big cities of Seattle and Portland with all-time record highs likely in both cities,” said the weather service.

Salem is expected to reach 106 or 107 degrees and Portland at 112, although Eugene could see temperatures drop to 98 degrees. Seattle is expected to hit 100 to 115 degrees, according to the National Weather Service. Most of both states are under excessive heat warnings until late Monday.

“Heat exhaustion happens when your body isn’t able to regulate its own temperature, and it begins to rise,” Dr. Caroline King-Widdall said in a statement from Kaiser Permanente Northwest. “This can happen when you’re working out rigorously or when you’re doing yard work outside on a hot day.”

A person rides on a paddle board on Lake Union during a heat wave hitting the Pacific Northwest, Sunday, June 27, 2021, in Seattle. Yesterday set a record high for the day with more record highs expected today and Monday. (AP Photo/John Froschauer) (Photo: John Froschauer, AP)

“Drink plenty of fluids, stay in an air-conditioned room, stay out of the sun, and check up on relatives and neighbors,” the weather service said in an advisory. Young children and pets should never be left unattended in vehicles under any circumstances.”

The extended “heat dome” over the Pacific Northwest was a taste of the future as climate change reshapes weather patterns worldwide, said Kristie Ebi, a professor at the University of Washington who studies global warming and its effects on public health.

“We know from evidence around the world that climate change is increasing the frequency, intensity and duration of heatwaves. We’re going to have to get used to this going forward,” she said.

Washington Gov. Jay Inslee lifted COVID-19 capacity restrictions on publicly owned or operated and non-profit cooling centers in light of the heat. Capacity is currently limited to 50% until the state fully reopens Wednesday.

In Oregon, Gov. Kate Brown suspended capacity limits for movie theaters and shopping malls — places with air-conditioning — as well as swimming pools ahead of a statewide reopening.

LA Times' strategy: Be a media platform, not just a newspaper
Technology