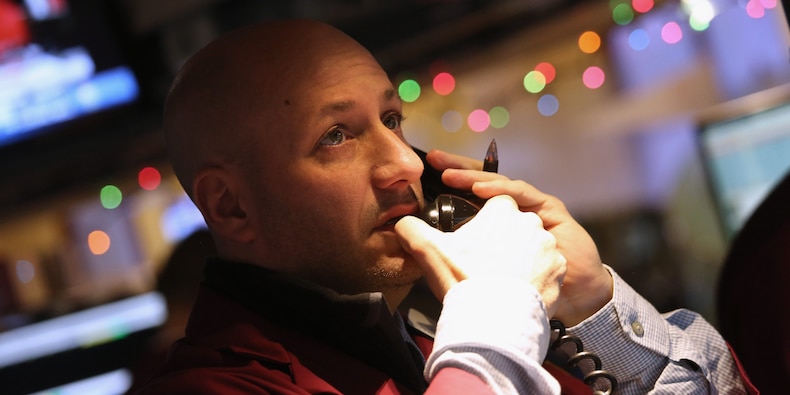 Stocks moved lower on Tuesday, edging further from their strongest levels on record over concerns about rising COVID-19 cases worldwide.

The S&P 500 and the Dow Jones industrial average were in the red for the second straight session after notching record closing highs at the end of last week.

But on the rise was the VIX, Wall Street's so-called fear gauge. It climbed by the most in three weeks, indicating that investors expect increased volatility over the next 30 days. A recent survey by Allianz found that many Americans want to stay on the sidelines of the stock market this year, worried that volatility will accelerate and hurt their investments.

The S&P 500's consumer-discretionary sector was losing the most ground, with airline stocks down after the US State Department said on Monday that it planned to issue a "Level 4: Do Not Travel" advisory for nearly 80% of countries as the coronavirus continues to spread. Shares of United Airlines were lower after the carrier indicated that quarterly losses would continue until air travel recovers to 65% of 2019 levels.

Officials in Japan are weighing a virus state of emergency, and the UK imposed a travel ban for visitors from India because of high case counts there. Argentina is battling another wave of cases.

Elsewhere, Apple will be in focus as it hosts a "Spring Loaded" virtual event at 1 p.m. ET during which it is expected to introduce two iPad Pro models.

Around the markets, a GameStop stake held by Alaska's revenue department soared by more than 700% last quarter. Alaska also said its Tesla bet had grown to $85 million in 18 months.

Bitfarms, a Canadian bitcoin-mining company, is planning a new mining site in Argentina that it said would be its largest yet.

Kelly Osbourne says she relapsed after nearly 4 years of sobriety: 'Not proud of it'