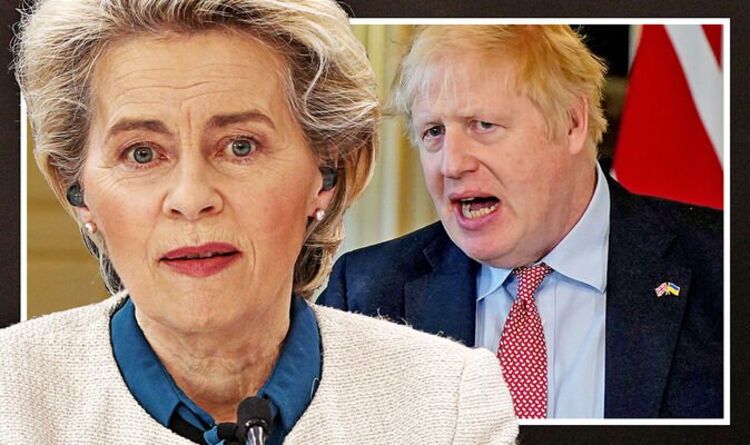 UK vs EU inflation: How do the latest price rises compare between Britain and bloc?

A steep increase in the price of petrol and diesel helped to push the UK’s consumer price index measure of inflation to its greatest level since 1992. The growth is adding further pressure to households struggling to contend with the cost of living crisis. In Europe, a similar pattern is being observed with inflation expected to grow by nearly two percentage points.

Between February and March the UK’s inflation rate grew from 6.2 to seven percent.

The Office for National Statistics (ONS) said fuel was the biggest contributor to inflation rising, with average petrol prices climbing by 12.6p per litre.

This is the largest monthly increase in fuel prices since records began.

Between the same months in 2021, prices jumped by just 3.5p per litre.

Diesel prices also rose by 18.8p per litre this year, compared with a rise of 3.5p per litre a year ago.

The score for March dwarfed predictions made by analysts who expected the measure to rise to 6.7 percent.

Prices for furniture, food and eating out in restaurants were also to blame for the increase.

The figures for last month do not yet reflect the average £700-a-year increase in energy bills that took place from April 1, when the energy price cap was raised.

How does UK inflation compare with the EU?

A flash estimate from Eurostat, the European Union’s (EU) statistical office, has revealed that annual inflation in the euro area is expected to be 7.5 percent in March.

Compared with February, that figure would represent a significant increase from 5.9 percent.

Since June 2021 inflation has been slowly growing in the bloc where it measured at 1.9 percent.

With the exception of July and September of 2021, the same pattern has been observed in the UK.

In fact, the rate of inflation here has been growing for a longer period of time – since February last year.

Inflation is the rate at which the prices of goods and services in an economy are increasing.

When inflation is low, the spending power of consumers is greater, while the opposite is true when the rate of inflation is high.

The Bank of England has set a target for inflation to not exceed 2.0 percent, and said last month that it anticipated the target to be met over the next two years, once interest rates have risen above 1.0 percent.

Embattled Brits are also feeling the financial pinch from a whopping 54 percent rise in the energy price cap, which means a household using a typical amount of gas and electricity will now pay £1,971 per year.

The £693 a year rise for an average energy bill will affect 18 million households, with 4.5 million customers on prepayment meters facing an even greater increase of £708 a year.