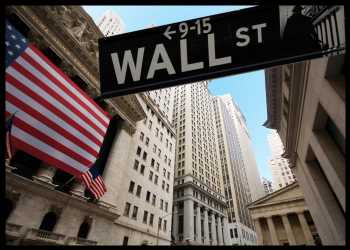 U.S. Stocks Move Back To The Downside After Seeing Initial Strength

After failing to sustain an initial move to the upside, stocks have moved mostly lower over the course of morning trading on Wednesday. The major averages have pulled back well off their highs of the session and into negative territory.

The downturn on Wall Street may partly reflect a reaction to comments from JPMorgan Chase (JPM) CEO Jamie Dimon, who urged investors to brace for an economic hurricane.

“You know, I said there’s storm clouds but I’m going to change it… it’s a hurricane,” Dimon said at a financial conference in New York, according to CNBC.

“You better brace yourself,” he added. “JPMorgan is bracing ourselves and we’re going to be very conservative with our balance sheet.”

Negative sentiment may also have been generated in reaction to a Labor Department report showing job openings tumbled by 455,000 to 11.4 million in April.

Stocks also came under pressure amid a jump by treasury yields, with the yield on the benchmark ten-year note climbing back above 2.9 percent.

The advance by yields came after the Institute for Supply Management released a report showing U.S. manufacturing activity unexpectedly expanded at a slightly faster rate in the month of May.

The ISM said its manufacturing PMI inched up to 56.1 in May from 55.4 in April, with a reading above 50 indicating growth in the sector. The uptick surprised economists, who had expected the index to dip to 54.5.

Airline stocks are turning in some of the market’s worst performances in morning trading, resulting in a 3.5 percent nosedive by the NYSE Arca Airline Index.

Substantial weakness has also emerged among banking stocks, as reflected by the 2.4 percent slump by the KBW Bank Index.

Commercial real estate, brokerage and chemical stocks have also shown significant moves to the downside over the course of the morning.

On the other hand, oil service stocks are turning in a strong performance on the day, with the Philadelphia Oil Service Index climbing by 1.7 percent.

The strength among oil service stocks comes as the price of crude oil for July delivery is jumping $1.73 to $116.40 a barrel.

In overseas trading, stock markets across the Asia-Pacific region turned in a mixed performance during trading on Wednesday. Japan’s Nikkei 225 Index advanced by 0.7 percent, while Hong Kong’s Hang Seng Index fell by 0.6 percent.

In the bond market, treasuries are extending the notable pullback seen in the previous session. As a result, the yield on the benchmark ten-year note, which moves opposite of its price, is up by 8.4 basis points at 2.928 percent.

PGIM Is Not a Crypto Fan