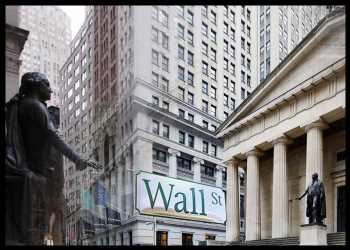 Extending the roller-coaster ride seen over the first few trading days of October, stocks are mostly lower in morning trading on Wednesday. With the drop on the day, the major averages are partly offsetting yesterday’s strong gains.

Lingering concerns about inflation and the Federal Reserve scaling back stimulus have contributed to the pullback on Wall Street following the rebound seen in the previous session.

Traders are also keeping an eye on developments in Washington, where lawmakers currently remain at an impasse over raising the debt ceiling.

Treasury Secretary Janet Yellen has warned the U.S. could face a recession if Congress fails to raise the debt ceiling by October 18th.

However, selling pressure is somewhat subdued following the release of a report from payroll processor ADP showing stronger than expected private sector job growth in the month of September.

ADP said private sector employment jumped by 568,000 jobs in September after rising by a downwardly revised 340,000 jobs in August.

Economists had expected private sector employment to climb by 428,000 jobs compared to the addition of 374,000 jobs originally reported for the previous month.

“The labor market recovery continues to make progress despite a marked slowdown from the 748,000 job pace in the second quarter,” said ADP chief economist Nela Richardson.

She added, “Current bottlenecks in hiring should fade as the health conditions tied to the COVID-19 variant continue to improve, setting the stage for solid job gains in the coming months.”

On Friday, the Labor Department is scheduled to release its more closely watched monthly employment report, which includes both public and private sector jobs.

Economists currently expect employment to increase by 488,000 jobs in September after rising by 235,000 jobs in August. The unemployment rate is expected to dip to 5.1 percent from 5.2 percent.

Oil service stocks are seeing substantial weakness on the day, resulting in a 4.8 percent nosedive by the Philadelphia Oil Service Index. The index is giving back ground after ending the previous session at a nearly three-month closing high.

The pullback by oil service stocks comes amid a steep drop by the price of crude oil, with crude for November delivery tumbling $1.58 to $77.35 a barrel.

Significant weakness is also visible among airline stocks, as reflected by the 3.8 percent slump by the NYSE Arca Airline Index.

JetBlue (JBLU) and American Airlines (AAL) are posting steep losses after Goldman Sachs downgraded its rating on the airlines to Neutral and Sell, respectively.

Natural gas, steel, and computer hardware stocks are also seeing considerable weakness, moving lower along with most of the other major sectors.

The major European markets have also moved to the downside on the day. While the U.K.’s FTSE 100 Index has slumped by 1 percent, the German DAX Index and the French CAC 40 Index are both down by 1.3 percent.

In the bond market, treasuries have moved modestly higher over the course of the morning after seeing initial weakness. As a result, the yield on the benchmark ten-year note, which moves opposite of its price, is down by 1.9 basis points at 1.510 percent.