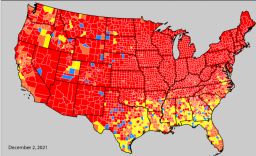 Johns Hopkins University reported late Monday that the United States had seen more than 50 million Covid-19 infections since the first confirmed cases stateside in January 2020. That’s more than the total population of countries like Spain, Argentina and Poland. According to the New York Times, it’s larger than the combined populations of Georgia, Michigan, North Carolina and Ohio. The number of Americans killed in the pandemic is also very near a horrifically huge round number, the 800,000 mark. That threshold should be crossed Tuesday.

The 50,078,410 U.S. infections reported by Johns Hopkins is not just more than the populations of many countries, it’s just about double the number of cases America saw during the Spanish Flu pandemic of 1918-1920. The number of deaths due to Covid-19 has also surpassed that from the outbreak a century ago. Of course, the country’s population was less than a third of what it is now, at about 105 million. Unlike the Spanish Flu, however, the current pandemic is not over.

After a brief respite in the late fall, U.S. cases have steadily begun to climb again this month, especially in hotspots in the Midwest, Southwest and New England. Compounding that issue is the recent spread of the Omicron variant, which was took its first life (in the U.K.) today.

Based on the threat of Omicron, the World Health Organization warned last week, “If countries wait until their hospitals start to fill up, it’s too late.”

Case in point is the largest state in the union, California, which has seen its infection rates rise 47% since Thanksgiving. The Golden State announced today a mandatory indoor mask mandate, noting that its hospital census was “at or over” capacity.

“Frankly with Delta and Omicron and the more rapid replication,” said the state’s top health official in his announcement, “we are seeing people who — if they do become severely sick — they are becoming sicker sooner. So we don’t have nearly as much room…as we did last year to make adjustments.”