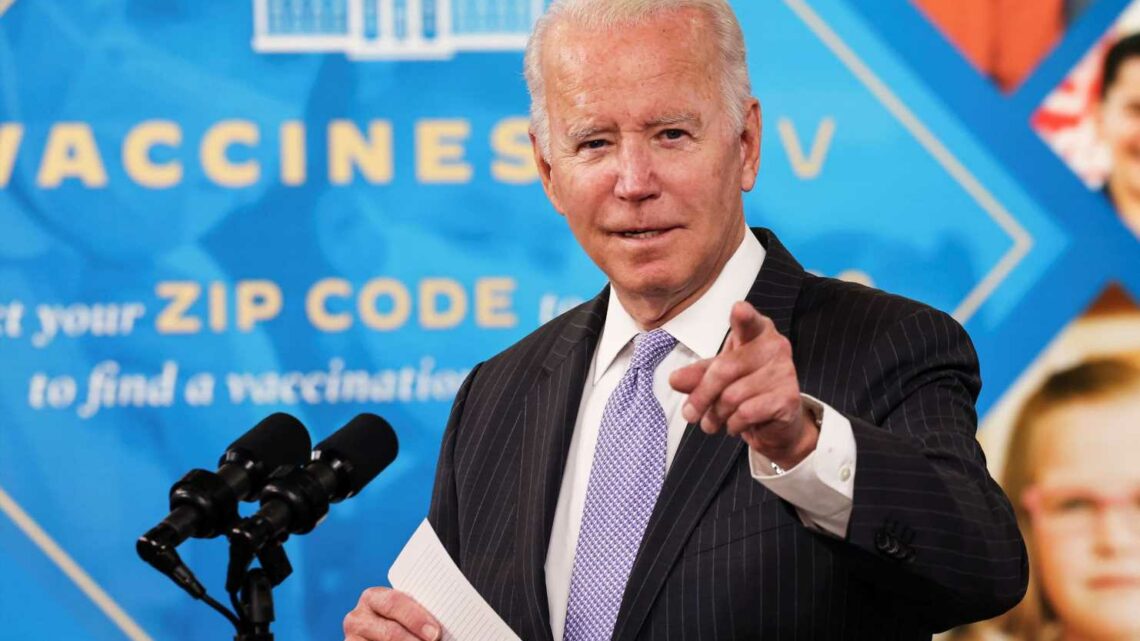 U.S. Chamber of Commerce says businesses should implement vaccine mandate until it is 'shut down'

The U.S. Chamber of Commerce on Monday recommended that businesses implement President Joe Biden's vaccine and testing requirements, despite a federal court order that has temporarily halted the rules.

"Ultimately the courts are going to decide, but employers still need to take this as a live ETS until it is definitively shut down," Marc Freedman, the Chamber's vice president of employment policy, said of the emergency temporary standard. "They should not bank on the preliminary actions of the 5th Circuit," he told CNBC in a statement.

The Occupational Safety and Health Administration, which polices workplace safety for the Labor Department, issued the rules through a rarely used fast-track process.

The U.S. Court of Appeals for the Fifth Circuit on Friday reaffirmed its decision to pause the requirements pending review, telling the Biden administration to refrain from implementation or enforcement until further notice. The appellate court is considered one of the most conservative in the nation.

The court-ordered pause, which the three-judge panel originally issued on Nov. 6, came in response to lawsuits by the Republican attorneys general of Texas, Louisiana, Mississippi, South Carolina and Utah, as well as several private companies.

Circuit Judge Kurt D. Engelhardt, in an opinion issued Friday, called Biden's requirements "fatally flawed" and "staggeringly overbroad." While the court has not yet ruled on their constitutionality, Engelhardt made clear that he believes the lawsuits seeking to overturn Biden's policy are likely to succeed.

Engelhardt, who was appointed by former President Donald Trump in 2018, criticized the requirements as "a one-size-fits-all sledgehammer that makes hardly any attempt to account for differences in workplaces (and workers)."

The Biden administration last week asked the court to lift the pause, warning that failure to implement the requirements "would likely cost dozens or even hundreds of lives per day" as Covid spreads. The Justice and Labor Departments maintain that OSHA acted well within its authority as established by Congress."

Industry groups such as the National Retail Federation, the American Trucking Associations and the National Federation of Independent Business have also sued in the Fifth Circuit to overturn the requirements. The industry groups have argued that the mandates would cause staffing and supply chain disruptions during the busy holiday season.

White House press secretary Jen Psaki told reporters Friday that the new rules will encourage people to return to the workplace by creating a safer environment where they are less likely to contract Covid, thereby alleviating staffing issues created by employees falling ill.

The U.S. Chamber of Commerce has not filed any legal action against the mandates. After the Biden administration published the requirements on Nov. 4, the Chamber said it was focused on helping its members get their employees vaccinated and communicating any implementation issues to OSHA, which will enforce the requirements.

The Chamber last month lobbied White House officials at the Office of Management and Budget to delay the vaccine and testing requirements until after the busy holiday season. OSHA has given businesses with 100 or more employees until Jan. 4 to ensure their staff have received the shots required for vaccination. After that date, unvaccinated employees must submit a negative Covid test weekly to enter the workplace. Unvaccinated workers must start wearing facemasks indoors at the workplace starting Dec. 5.

The White House last week told businesses to start implementing the requirements, despite the court-ordered review.

"People should not wait," White House Deputy Press Secretary Karine Jean-Pierre told reporters during a briefing. "They should continue to move forward and make sure they're getting their workplace vaccinated."

The Biden administration faces a flurry of lawsuits seeking to overturn the requirements. Republican attorneys general in at least 26 states have challenged Biden's policy in at least five federal appellate courts. The Republican National Committee has also challenged them in the D.C. Court of Appeals.

As Republicans seek to overturn the mandates, some of the nation's largest labor unions want the courts to expand them to cover smaller businesses. The United Food and Commercial Workers International Union, the AFL-CIO and the Service Employees International Union filed petitions for review last week.

The cases will likely be consolidated in a single court through random selection among those jurisdictions where lawsuits were filed. The Justice Department said last week that it expects the random selection to take place on Tuesday at the earliest.

OSHA issued the requirements under emergency authority established by Congress. The agency can shortcut the process for developing workplace safety and health standards, which normally takes years, if the Labor secretary determines that a new rule is necessary to protect workers from a grave danger.

David Vladeck, a professor of law at Georgetown University, told CNBC last week that there's a "high probability" that the case will end up in the Supreme Court, where there's a conservative majority.