This CEO worked for the Obama campaign in college, but went into sales to take care of his sick dad — now he’s raised $8.5 million to make the sales profession more welcoming to everybody

Sahil Mansuri has spent his entire career in sales.

Mansuri was all set for a career in foreign service and law — he worked on the 2008 Obama campaign — but, he found he hated politics in general and Washington DC in particular.

More importantly, he wanted to find a lucrative career path to help his family start paying off some medical bills; his father had 29 surgeries in 29 years. His father — who had immigrated from India to the US with his wife three years before Mansuri was born — got sick when Mansuri was a child.

“I got a job in tech sales, my parents were so horrified,” Mansuri recalls. “One day you’re working in politics and law, and now you’re a failure.”

Despite his parents’ fears, Mansuri ended up thriving in the sales field: In 2011, he became an early employee at popular job-ranking site Glassdoor. By 2016, he was the VP of Product Management at SalesPredict, and was there when it was acquired by eBay.

On Wednesday, Bravado emerged from stealth mode with $12M in funding, including the announcement a $8.5M series A round led by Redpoint Ventures. Other principal investors include Freestyle Capital, Village Global, Precursor Ventures, Kindred Ventures, and Kevin Mahaffey.

This announcement marks the network’s official launch, though Bravado has amassed over 50,000 members already by word of mouth. More than 85% of Bravado users are in enterprise tech sales — it counts salespeople at companies including Salesforce, LinkedIn, Microsoft, Slack, WeWork, Uber, Oracle, and IBM as its users.

The ultimate goal of Bravado, says Mansuri, is to help salespeople establish credibility and close more deals, even as it tries to make the entire field more welcoming to newcomers — especially those from different backgrounds.

“We can reimagine the profession to not be ‘Glengarry Glen Ross,’ always closing, ‘Wolf of Wall Street,’ mostly white dudes,” Mansuri said. He envisions a field more representative of women, people of color, and the LGBTQ+ community.

After all, being a salesperson changed his life, he says. A decade-plus in sales made him “financially independent” and able to “pay off my parents’ medical bills.” After SalesPredict’s acquisition, he says, he could have retired.

“My entire life changed because of sales, so I don’t understand the stigma,” Mansuri said.

Bravado has three main parts to its business: a portfolio function, a mentorship program, and a community for professional development.

The portfolio function of Bravado’s professional network allows sales professionals to visually list the companies they have worked with, as well as testimonials from clients. Bravado aims to take that information and establish a credibility score for the salesperson. The idea is that salespeople with high scores will attract new prospects, just by virtue of their digitally-determined reputation.

The third component of Bravado, beyond portfolios and mentorship, is the Bravado Community — an online forum, sort of like Reddit, that lets users discuss their careers and swap tips. It also has tools for facilitating live events.

Bravado’s seed round was led by Jenny Lefcourt, general partner at venture capital firm Freestyle and a founding member of All Raise, a group of women venture capitalists. In her view, even this early version of Bravado has started introducing people to the sales profession who may have otherwise bounced off.

“One thing that’s been so interesting to see is that people who have been using Bravado have seen doors open to them that they wouldn’t otherwise have seen,” Lefcourt said. “It’s one thing to have a thesis about how something can work and have people using it, but to see that value proposition fully come to life is pretty thrilling this early in the game.” 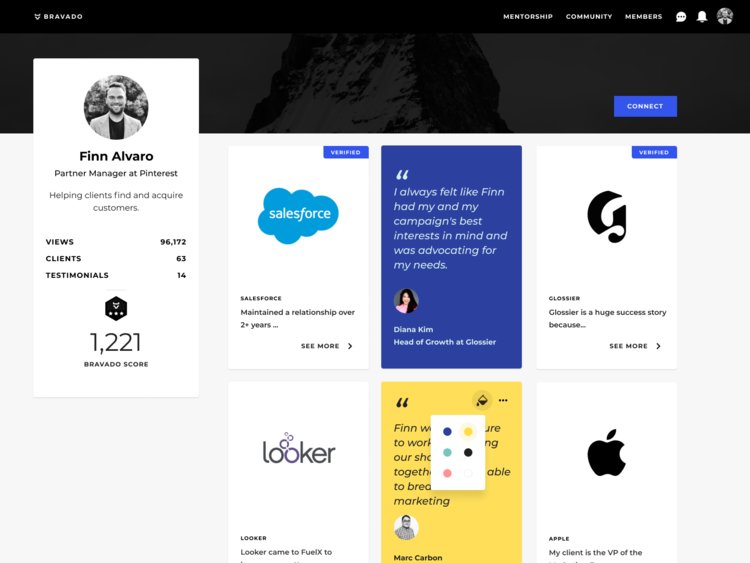 Finn Alvaro, who works in sales at Pinterest as a partner manager, has been an early adopter of Bravado; Mansuri was Alvaro’s sales manager at his first job out of college. Alvaro sees LinkedIn and Bravado as complimentary, with the added benefit of Bravado bringing clients directly to him.

“Most sales people will go out and prospect someone on LinkedIn, but they can come on Bravado and find you,” Alvaro said. “Bravado provides an extra layer of credibility that you can’t get on LinkedIn,” through client testimonials, the client company list, and the Bravado score.

Preeti Pinch, a senior account executive at Uberflip says that her Bravado profile has led to job offers through the platform.

“I’m not the kind of person to go toot my own horn, so it’s been a great way to build my brand, and that credibility and trust,” said Pinch of her Bravado profile.

Pinch also applauds the Bravado mentorship program, where she was paired with an undergraduate who was looking for career advice. She says that it’s her hope that this student came away with the understanding that she didn’t have to be “an alpha male” or “pushy, cutthroat” to succeed in sales.

“Hopefully I think it helped her understand you don’t have to be that kind of personality,” Pinch said. “Not even being a male, you can still do very well in this profession.”

Read more: The 10 highest-paid tech CEOs in the US

This story was originally published by Glassdoor.

A Deep Retracement For Ethereum and XRP is Inevitable, Based on This Indicator
Blockchain