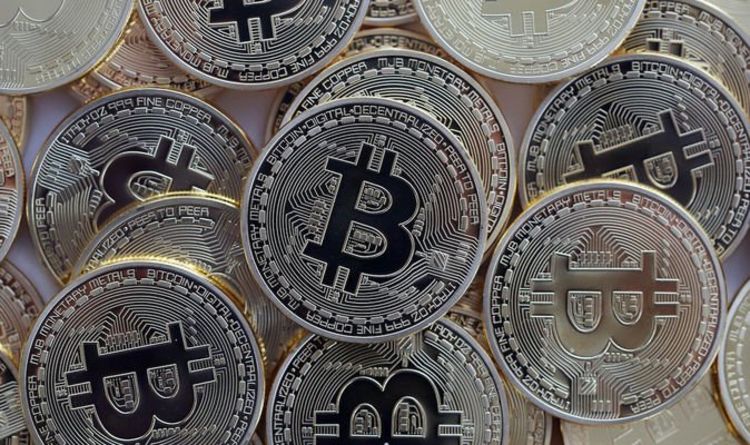 BTC has endured a rocky 2021, with a troubled path to its latest value high of $62,035 (£45,409). Over the last year, it gained and lost $20,000 (£14,640) at a time, as world governments cracked down on trading, citing BTC’s use in illegal transactions and its dangerous volatility. While that has panicked Chinese officials into an all-out ban, other countries have cautiously approached the currency and attempted to tame it.

These allow traders to exchange price movement analytics without trading directly in BTC, eliminating some of its inherent volatility.

And it kicked BTC into a new price range, boosting it by 3.1 percent on the day.

But while trading is starting to capitalise on cryptocurrencies, banks are reluctant to dip their toes in the market.

They have several factors holding them back from transferring their approach from cautious to wholehearted embrace.

Writing in the publication, he said legacy systems, regulation and a lack of “collective action” remain significant barriers.

Banking legacy systems support the back end of a bank’s services with decades-old mainframe technology.

These deliver the most traditional banking services, including transaction processing, account set up and other actions such as loan processing.

Mr Guthrie said banks have “no interest in disrupting” their time-honoured services after plying them with significant capital for decades.

The cryptocurrency market is an unregulated “Wild West”, meaning people can use tokens for illicit purposes.

Terrorist groups have used coins to fund their operations, and fraudsters have used them as inspiration for a wealth of new scams, according to the International Monetary Fund (IMF).

Banks have had to halt payments to crypto trading platforms and protect customers from these risks in the past, and don’t want to get tied up themselves.

He said much like telephones, banks embracing cryptocurrency would find it useless “unless many people install them”.

As such, there likely won’t be any movement towards one bank adopting cryptocurrency services until they all can.

The Sandbox raises $93M to expand its NFT metaverse