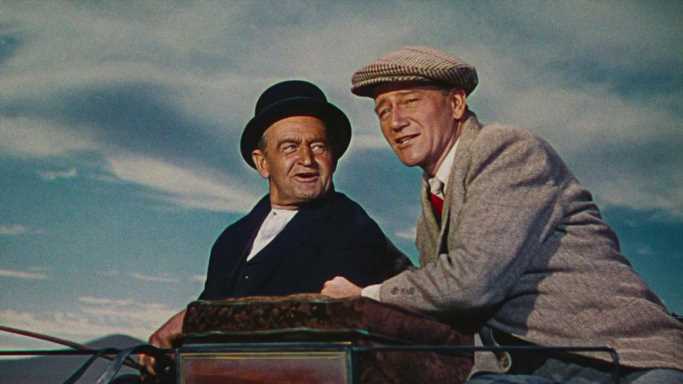 The Best John Wayne Movie That Isn’t a Western

John Wayne, whose original name was Marion Robert Morrison, was known as The Duke, a tip of the hat to his place among Hollywood’s royalty. He appeared in nearly 180 movie and television productions. He was among the top 10 box office draws as an actor from 1949 until 1970, topping the list several times. He made among the first iconic movie westerns — “Stagecoach” (1939) — and the film may critics believe is the best western — “The Searchers” (1956) — which is on the American Film Institute’s list of the 100 best movies of all time. Despite his fame, he only won one Oscar as an actor, the Academy Award for Best Actor for his role as Rooster Cogburn in “True Grit” (1969).

Although Wayne is known almost exclusively for his work in westerns, he made a number of films, some of which are classics, in roles outside the genre.

To identify the best movie Wayne has ever starred in that is not a western, 24/7 Tempo reviewed his acting roles in movies listed in his IMDb actor filmography page.

Of all the movies Wayne made that are not westerns, many are war movies. The same qualities that made him an ideal gunslinger, cowboy or sheriff in the Old West (toughness, leadership and a willingness to sacrifice) also made Wayne a believable soldier, captain or general. Also like many of his westerns, a number of Wayne’s war films were critical and commercial smash hits and are hailed as classics today.

24/7 Tempo reviewed a database of over 17,000 movies and selected all the ones Wayne was in that were not westerns. The combined score arises from the movie’s IMDb rating, Rotten Tomatoes audience score and Rotten Tomatoes Tomatometer score. Genre and casting data come from IMDb.

The best movie Wayne starred in that’s not a western was “The Quiet Man,” released in 1952. Here are some details:

In “The Quiet Man,” Wayne plays retired American boxer Sean Thornton. Hoping to buy his father’s land, Thornton moves back to the Irish village where he was born. There, he falls in love with a fiery woman whose brother is against the union between her and Thornton.

Click here to see all the best and worst John Wayne movies that aren’t westerns.